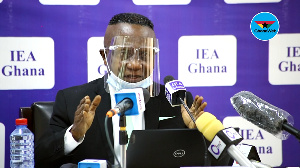 The Institute of Economic Affairs has called for bold, innovative and ambitious measures to achieve development indicators.

Director of Research at the IEA taking his turn on BizTech with GhanaWeb’s Mawuli Ahorlumegah this week reiterated his call on government to raise more revenue by pugging the numerous loopholes in the tax system.

Already, the Ghana Revenue Authority has recorded a shortfall in its revenue mobilization efforts for the first six months of 2021.

The revenue arm of government has collected GH¢25.89 billion in tax revenue as against GH¢26.1 billion targeted for the period, resulting in a GH¢212 million shortfall.

As a result of this, Dr John Kwakye believes that aside from boosting revenue generation efforts, it is time for governments to take a serious look at expenditure rationalization.

He explained that this could be achieved through curtailing recurrent expenditure to the extent it will be prudent to create space for more investment expenditure which will spur economic growth.