Obuasi mourns as the body of slain Policewoman arrives home » ™ 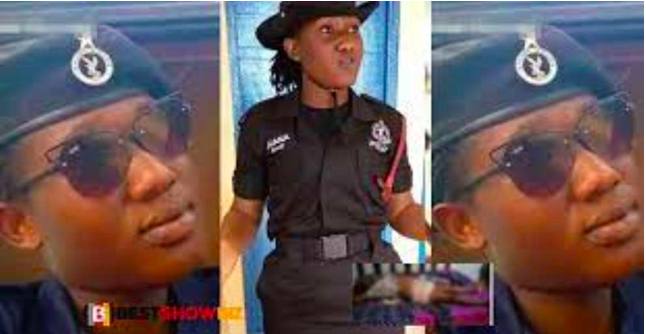 The whole of Obuasi has been thrown into a state of mourning when the mortal remains of slain policewoman Constable Sandra Asiedu, arrived on Friday morning.

The family of the deceased who went to Damongo for the body say they needed to take her back to Obuasi where she was born and raised, for proper interment according to their custom.

Not only the Obuasi Police who showed love to their departed compatriot upon the family’s arrival, but scores of mourners from the municipality met the family at the entrance of the city.

The Obuasi police surprised the late Constable’s family as they gave her gun salutes.

Father of the late Constable Asiedu, Mr. Victor Osei speaking to journalists announced that the one-week ceremony would be held on Thursday, August 12, 2021, at Kriki in Obuasi.

“It was sad but a spectacle to behold. We thank the police for their support. The body has been deposited at the mortuary,” Mr. Victor Osei noted.

The deceased father revealed he does not know the suspect, Louis Asante, who they say was her boyfriend. He said some friends of Sandra at Damongo admitted that the suspect used to visit her and could spend a week there.

He then called on the public to help the police in arresting and prosecuting the suspect.

Sandra Asiedu was found dead at her residence at Damongo in the Savannah region on 2nd August 2021. She was found in a pool of blood with wounds believed to be knife stabs.

The body was then deposited at West Gonja District Hospital, pending investigation. Her boyfriend is highly suspected and the Police are on a manhunt for him.

Meanwhile, an amount of ten thousand Ghana cedis (Ghc 10,000.00) has been named as a reward for any person who furnishes information leading to the arrest the deceased boyfriend who is currently at large.