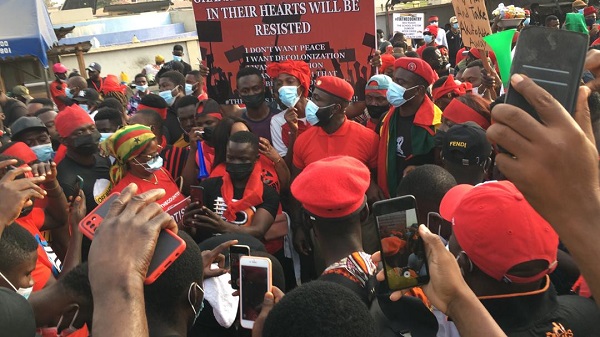 A convener of the #FixTheCountry demonstration, Mr Oliver Mawuse Barker Vormarwor, says the campaigners will not accept money from any political party if they are offered any support.

According to him, they will not accept the money because the campaign is not politically motivated and therefore does not want to be influenced by any political party.

He said this after the #FixTheCountry demonstration.

Thousands of Ghanaians took to some streets of Accra to demand accountability, good governance and better living conditions from the government through the #FixTheCountry demonstration on Wednesday, August 4, 2021.

The group who appeared in red, gold, green, and black outfits gathered at the Obra Spot near the Kwame Nkrumah Circle at 7 a.m. on Wednesday and headed towards the Black Star Square.

Although the campaigners did not formally present any petition to any government official, they made their concerns known on placards with some daring inscriptions.

Some of these were, “Every Corrupt Act destroys life”, “Corruption has put Ghana in chains”, “Ghana stands against corruption”, “We aim for waakye, they aim for V8”, “Life no balance”, “A new constitution for the people”, “turn all prisons to hotels and put prisoners on state farms”, “stop tribal discrimination”.

Others were, “Pay people to work not to talk”, “Fix Dumsor”, “No revisionism”, “Nkrumah remains the Founder”, “Who killed Ahmed Suale”, “Tribal Politics is backwardness”, “Dishonesty and lack of patriotism gave us [the] year of no return”, “Fix the country, Article 71 is bogus and fraudulent”, “How far with Nam 1”, “Fix our road’, and “Fix the whole country now”.

Speaking on Atinka TV’s morning show, Mr Oliver Mawuse Barker Vormarwor instead urged political parties to use their money to reform their parties and organize themselves well in a way that will help the country and not through the #Fixthecountry campaign.

“The money should be used to reform their own party. If NPP has money, they should use the money to organize the party; We do not need money; what we need is the people,” he said.

Meanwhile, Mr Oliver Mawuse Barker Vormarwor said the demonstration would be extended to the regions so that the people in the regions can also register their concerns for the government to know about it.

Don’t Compare Yourself to Lil Win – Salinko to Ras Nene aka Dr. Likee