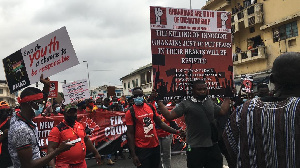 Thousands joined in the protest

• Protestors came out on August 4 for the #FixTheCountry protest

• A number of big names were absent

• They included names like John Dumelo and Yvonne Nelson

After the #FixTheCountry protest and the magnitude of the numbers of protestors who hit the streets to register their displeasures with the way politicians across the decades, have managed this country and its resources, there was something that was conspicuously missing.

When this protest started on social media, it became easy for influential persons to jump onto the trends, urging everybody to equally do so, and it was expected that as loud as many of these personalities were online, they would represent the same in person.

Unfortunately, though, not many of these big names showed up for the August 4, 2021, protest which got thousands of Ghanaians to pour onto the street.

The protest which begun at the Obra Spot in Accra, ended at Independence Square, closing the day of an over 5 hours protestation.

Notable names like Blakk Rasta and Captain Smart, both media personalities, were actively involved in this protest but which other big names did not show up although there was an expectation they would?

Here are some of them:

We will MOUNT THE PRESSURE! They will start taking us seriously! The fake promises will STOP! #FixTheCountry @NAkufoAddo @MBawumia

Ok to the specifics …. we want/need a better and improved HEALTH SECTOR , EDUCATIONAL SYSTEM in Ghana, JOBS For the people, GOOD roads (not the disposable election kpakpakpa roads). Guys, keep the list going… #FixTheCountry #FixTheCountryNow @NAkufoAddo

I just bought gas for GH ¢95 I want to know if it’s my attitude that caused the price to go up?

How do I fix myself to change it please?

It must be stated that along the way, actress Efia Odo decided to no longer associate herself with the protest, giving reasons that her mental health was at stake.

This road starts from spintex community 18 and joins the motorway in less than 10 minutes but the road is horrible. Kwame Nkrumah started this road many years ago but nobody has been able to finish it. Fixing this will decrease the amount of fuel used. #FixMotherGhana pic.twitter.com/0gUIqQdcWa

The rest are Mr Drew, Joey B, among others.

M.N.D Jawula, four others petition against violation of rights of Muslim students at Wesley Girls