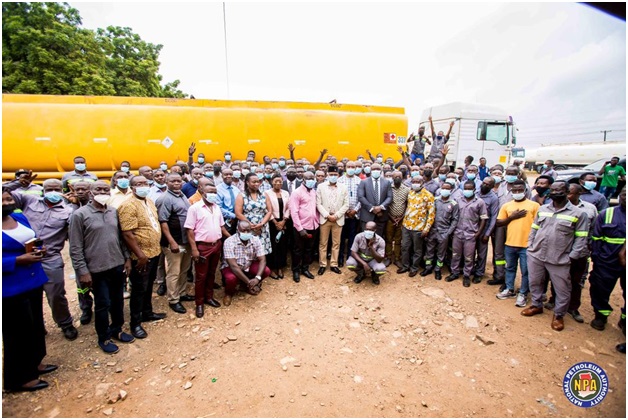 Jubilant tanker drivers in a pose with Dr. Mustapha Abdul-Hamid.

PETROLEUM TANKER drivers have welcomed government’s announcement to begin the construction of the 5.4 kilometers road from the VALCO Roundabout to the Tema Oil Refinery (TOR) depot.

The construction, which will be done in 24 months, is expected to begin in two weeks’ time.

This was disclosed by the Deputy Minister for Roads and Highways, Stephen Jalulah, when the Chief Executive (CE) of the National Petroleum Authority (NPA), Dr. Mustapha Abdul-Hamid, took officials of the Ministry of Roads to the Tanker Yard in front of the Tema Oil Refinery to enable them assess the extent of deterioration of the road stretching from the VALCO Roundabout to the depot areas around TOR.

Dr. Abdul-Hamid undertook the visit as part of his engagement with stakeholders in the downstream petroleum industry.

The deplorable nature of the road has been a source of worry for tanker drivers, who served notice last month of their intention to abandon their trucks if the road was not fixed.

Dr. Abdul-Hamid assured them of immediate plans to level the tanker yard and make the movement of their vehicles easier, so the contractor could begin the actual construction of the 5.4-kilometer road.

The delegation, led by Dr. Abdul Hamid, included some senior officials of the NPA as well as the Director of Urban Roads, Abass Awalu.

Addressing the tanker drivers, Dr. Abdul-Hamid acknowledged the important role that they played in ensuring that petroleum and gas products reached all parts of the country.

“You are a very important part of the value-chain in the downstream petroleum industry. We do not take you for granted at all,” Dr. Abdul-Hamid told them.

He appealed to them to use dialogue to put forth their challenges rather than threatening a strike action at the least opportunity.

“We are equal stakeholders in the development of this country. When the country works, we all benefit, when it fails, we fail with it. Let us therefore work together to address our common challenges,” he added.

Throwing more light on the construction, Director of Urban Roads, Abass Awalu, said the first two kilometers, which would be dualised, would be concrete, given the heavy nature of the vehicles that plied the road. Mr. Abass said that the remaining 3.4 kilometers would be asphalt, assuring them also that the construction would be done with minimal disruption to vehicular movement.

George Nyanu, Chairman of National Petroleum Tanker Drivers Union, thanked Dr. Hamid for honouring his promise and assured him of their preparedness to support him as long as he continued to dialogue with them.

He called on the NPA to pay attention also to roads leading to other depots, especially those in Kumasi and Takoradi because these were also in deplorable states.

Chairman of the LPG Tanker Drivers Union, Shafiu Mohammed, on his part, thanked the CE of the NPA and posited that if he continued to deal fairly with them, they will contribute their quota to the rapid development of the downstream industry.