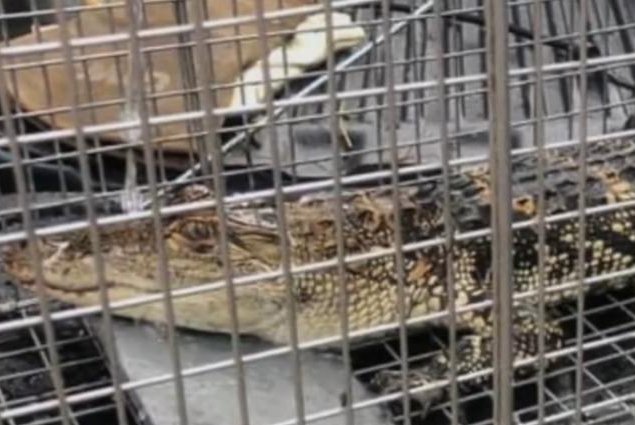 Aug. 4 (UPI) — A public works employee in a Michigan town was making his regular rounds when he ended up performing an irregular duty — capturing an alligator.

Andy Bills, who works for the Stanton Department of Public Works, said he was observing sewage ponds in the southern part of the city when he saw a turtle walk into one — closely followed by an alligator.

“It took me a good minute or so to gather my thoughts and try to figure out if I really just saw what I thought I saw,” Bills told WXMI-TV.

Bills alerted his boss and coworkers to the non-native reptile’s presence and retrieved his fishing rod to attempt an amateur capture.

“Once I saw that he was there, there was no way I was gonna let somebody else catch it. I wanted to be the person that got to catch it,” he said.

Bills was able to hook the gator and bring it back to shore, where he snagged it in a fishing net. He said the fight did not end there.

“It got out at one point, out of the net, and it kind of charged us a couple times with its mouth open,” Bills said.

Bills eventually wrangled the gator into a cooler, and a Michigan Department of Natural Resources officer took custody of the reptile and transported it to the Wilderness Trails Zoo, near Birch Run.

The alligator’s origins are unknown. Bills suggested the creature may have been a pet that was abandoned by its owner when it became too large to keep inside a house.

- Advertisement -
Share
Facebook
Twitter
Pinterest
WhatsApp
Previous articleWatch: Red Velvet tower over tiny town in ‘Queendom’ mood sampler
Next articleWoman discovers boyfriend is cheating on her after he sends a photo of his food
- Advertisement -

You’re our ‘spiritual father’ but the laws must work