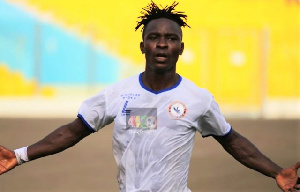 Berekum Chelsea striker Kofi Owusu has lashed at Ghanaian referees, blaming a chunk of them for the fallen standards of the local game.

Ghana football has paled out of dominance and consistency at the continental level in the last 10-15 years with clubs struggling to perform.

The initial 4 slots awarded Ghana to compete in the CAF Champions League and the CAF Confederation Cup have been slashed to just 2 while Ghanaian clubs have struggled to make the group stage of the two competitions.

According to Kofi Owusu, the reason our clubs struggle to make an impact is that the teams get unmerited favor from referees in the local competitions.

Kofi Owusu, a former Ghana Premier League top scorer believes the bias officiating of most referees is hugely responsible for the drop in standards of the local game.

“We should apportion a huge chunk of the blame to referees for the fallen standards of our local game,” Kofi Owusu told Silver 98.3 FM.

He added “Referees deliberately frustrate and tactically weaken teams to benefit their favorites. It is happening in our League. It is therefore not surprising that most of our referees had their covers blown in the Anas Expose.”

“Most of our Ghanaian referees are poor. They are destroying our game. That is why we fail to get competitive teams to represent in Africa because of referee bias,” he noted.