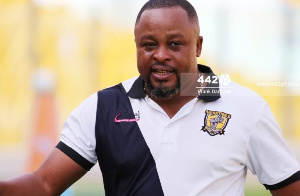 AshantiGold interim coach Thomas Duah has stated confidently that he is capable of leading the club in Caf Confederation Cup.

The Miners have reached the final of the MTN FA Cup, and with opponents Hearts of Oak already qualified for Caf Champions League, they will take up the Confederation Cup slot.

There are talks of Ashgold bringing in a more experienced hand to take charge of their continental campaign, but Duah has declared himself ready.

“We’ve automatically qualified for the CAF Confederation Cup. Coaches are hired to be fired so bringing in a new foreign coach is not my issue but I can say emphatically that I’m capable to lead AshGold to Africa,”

Duah has been with the Miners for so many years and served as an assistant to both Milovan Cirkovic and Romain Folz this season.

Duah was asked to take charge following the departure of Frenchman Folz, and he has guided Ashgold to an impressive finish.

They have the opportunity to win their first silverware since 2015 on Sunday in the FA Cup final against league champions.