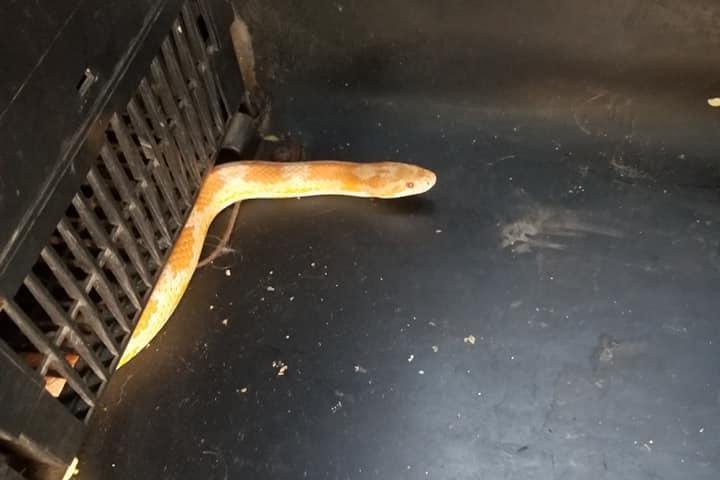 Aug. 2 (UPI) — The operator of a private bus service in British Columbia is trying to find the owner of an unusual piece of left-behind property: a pet snake.

Michael Hathaway, who operates Mountain Man Mike’s bus service, which operates along Highway 3 in the Southern Interior of British Columbia, said he was doing maintenance work on one of his buses Friday when he came across an orange-and-white snake in a heater.

Hathaway said the bus had recently traveled from Vancouver to Kaslo. He said he initially thought the snake was a child’s toy that had been left behind by someone on the trip.

“At first, I thought someone had left it as a joke … like Snakes on a Plane,” he told CBC News. “But when I poked it, it came to life.”

Hathaway said he was concerned about the well-being of the reptile, which he later determined was a corn snake, a popular species kept as pets.

“I was worried it was injured,” he said. “Also, the bus was parked in a parking lot for around 16 hours with all the windows sealed, so it was about 120 degrees in that bus.”

Hathaway said the snake did not appear to be injured after he brought it home and placed it in a makeshift enclosure with some food and water.

He said the snake may have been traveling with its owner when it slipped out of a bag. He said he has been contacting recent passengers, but thus far none of them have claimed the snake.

Hathaway said his family would be happy to give the snake a new home if its owner isn’t found.

“My kids already named it Cream Corn and are fighting over whose room it will sleep in,” he said.