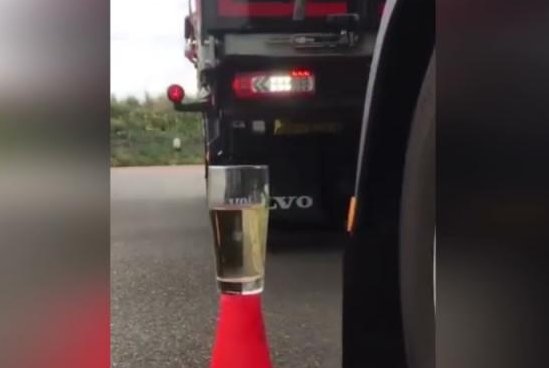 July 29 (UPI) — A Dutch trucker took on a social media “tea bag challenge” and used his vehicle to drop a tea bag into a glass of hot water.

Johan Groteboer, of Rijssen, said he saw Finnish truck drivers posting “tea bag challenge” videos on social media, so he decided to attempt his stunt with his 82-foot-long LHV, or long heavy vehicle.

“It is one of the largest vehicles on the road. I guess that’s why the video is so popular,” Groteboer told Zenger News.

The video, which Groteboer posted to Facebook, shows him backing up the truck to the site at which the glass was placed and lowering his suspension to make the tea bag tied to the back of the vehicle drop into the water.

Groteboer, who has been driving trucks for 30 years, said it was a challenging feat.

“I had to pull out all the stops to really get past the traffic cone without disturbing it and yet still drop the tea bag directly into the hot water,” Groteboer said. “In that scenario, you only have to go very slightly off track, and you lose it.”

Groteboer’s video went massively viral, resulting in friend requests from across the globe.

“I had friend requests from China, Japan, Austria, Italy and Norway. I am still stunned at the reception, but I must admit it’s getting a bit out of hand now,” he said.