Study: 9/11 first responders with the highest exposure to toxic dust at increased risk for liver disease 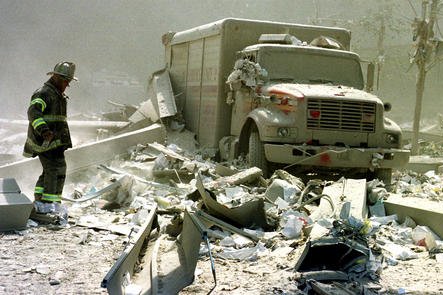 July 30 (UPI) — First responders who arrived at the World Trade Center immediately after the Sept. 11, 2001, terrorist attacks were more likely to develop liver disease than those who later worked at the site during rescue and recovery efforts, a study published Friday by the American Journal of Industrial Medicine found.

Among emergency workers who arrived at the site in lower Manhattan in the immediate aftermath of the attacks, 17% showed signs of liver damage, the data showed.

That percentage fell to 16% for those who reported for rescue and recovery efforts on Sept. 12 or 13 and then to 11% for among emergency workers at the site from Sept. 14 to 30.

The liver damage seen in these workers increased their risk for toxicant‐associated fatty liver disease, which in turn often leads to liver failure or liver cancer, according to the researchers.

“Now that we have this link, the next step is to understand why or how the toxic dust actually causes liver damage,” said Jirapatnakul, an assistant professor of diagnostic, molecular and interventional radiology at Mount Sinai School of Medicine in New York City, which monitors these responders as part of a federal World Trade Center Health Program.

The liver is vulnerable to damage from chemical exposures due to its role in detoxifying foreign substances that enter the body.

The liver damage seen in this study, called hepatic steatosis, or fatty liver disease, is associated with chemical exposures, the researchers said.

It occurs when the liver contains abnormally high levels of fat, they said.

After the 2001 attacks, more than 20,000 responders were exposed to dust, airborne particulates and chemicals known to cause liver toxicity, increasing their risk for toxicant-associated fatty liver disease.

While the scans were given to monitor the responders for lung disease, an algorithm developed by the researchers found evidence of liver disease in the portion of the liver visible in the scans, the researchers said.

The algorithm found evidence of hepatic steatosis in just over 14% of the responders.

Responders who arrived earlier, within about two weeks of the attack, had a higher exposure to the toxic dust at the World Trade Center site and more evidence of liver disease in their scans.

Responders with evidence of liver damage are being evaluated for possible referral to liver specialists for diagnosis and treatment, according to the researchers.

“Our study showed that continued monitoring for liver disease is warranted in World Trade Center responders, such as law enforcement, fire, and recovery workers in any field at the site, particularly those who arrived at or shortly after the attacks and had a higher exposure to the toxic dust,” study co-author Dr. Claudia Henschke said in a press release.

“At the moment, there are no protocols to monitor responders for liver disease, so this study points to the need to further study this issue in this at-risk population,” said Henschke a professor of diagnostic, molecular and interventional radiology at Mount Sinai.

My daughter’s looks keep changing, I can’t tell who she currently looks like