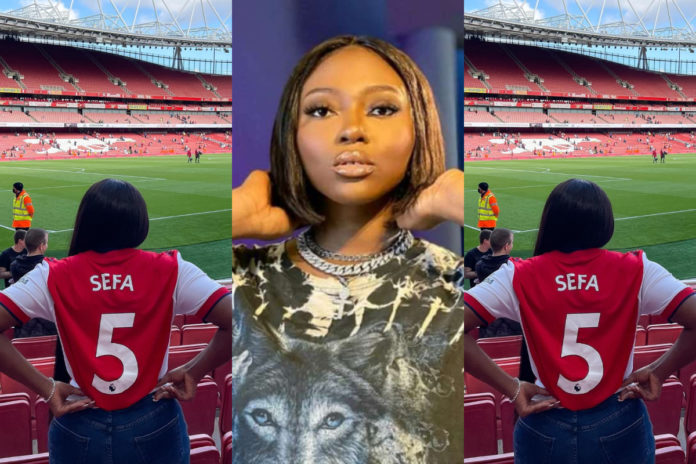 Apparently, S3fa is a staunch supporter of the Gunners and she expressed this in style by storming Emirate Stadium to watch Arsenal’s match against arc rivals Chelsea in a pre-season charity-friendly game on August 1.

Beaming with an infectious smile and having her beauty padded by the replica jersey of Arsenal she wore, S3fa decided to take photos when everyone has almost left the stadium soon after the game ended.

She was so excited as she posed for the camera with other Ghanaians living in the UK who came to watch the game as well. She laster splashed the photos on her IG page alongside the caption;

Well, Arsenal lost the match by 2-1. Kai Havertz and Tammy Abraham struck either side of Granit Xhaka as the Blues kicked off the pre-season tournament, which also includes Tottenham, with a win.

In other news making rounds on www.Ghgossip.com, Yul Edochie has cautioned men to cut their wedding coats according to their cloth in order to avoid huge embarrassment and regret.

The thespian who’s gradually doing well as a filmmaker said it’s unwise for a man to borrow a huge sum of money to throw a lavish wedding only to be in debt afterward.

In his opinion, any lady that exerts pressure on the prospective husband to have a huge wedding despite the fact that their financial standing is in no position to do that and requires borrowing has no love for man.

“Don’t borrow money to do a big wedding and be in debt afterwards. It’s not a smart move. Cut your coat according to your size. Do the level of wedding you can afford. Then face your hustle. You’re not here to impress anybody.

God might bless you one or two years after then you can decide to spend your millions on your wedding anniversary annually.

If your spouse is pressuring you to borrow money and do a lavish wedding to impress people when he or she knows you don’t have the money then that person doesn’t love you.