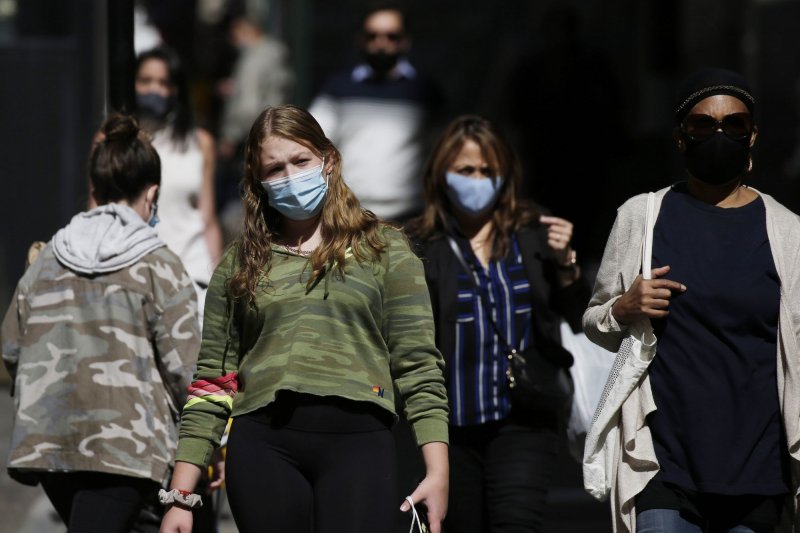 July 30 (UPI) — The Centers for Disease Control and Prevention on Friday released data showing that vaccinated people are at increased risk for COVID-19 infection with the Delta variant and that they can spread the disease nearly as easily as unvaccinated people.

Nearly 75% of COVID-19 cases connected with large gatherings on Cape Cod in Massachusetts occurred in people fully vaccinated against the virus, according to data published Friday by the CDC.

The new data comes after the agency issued guidance on Tuesday recommending that everyone, including those who are fully vaccinated, wear masks in indoor public settings in areas where COVID-19 transmission is high.

An internal memo circulated at the CDC this week warned that the Delta variant of the coronavirus is significantly more transmissable than previously known and is as contagious as chickenpox.

“High viral loads suggest an increased risk of transmission and raised concern that, unlike with other variants, vaccinated people with Delta can transmit the virus,” Walensky said.

In samples tested for a COVID-19 variant, 90% were identified as the Delta variant of the coronavirus, which is thought to be more contagious and less susceptible to vaccines, the agency said.

Just under 80% of those infected experienced symptoms of the virus and five of the 462 cases reported as part of the outbreak required hospital treatment, the CDC said.

Four of the five people hospitalized due to COVID-19 in these cases were fully vaccinated, it said.

These findings are “concerning and [were] a pivotal discovery leading to CDC’s updated mask recommendation,” Walensky said.

“The masking recommendation was updated to ensure the vaccinated public would not unknowingly transmit virus to others, including their unvaccinated or immunocompromised loved ones,” she said.

However, in an internal memo, first reported by the New York Times and Washington Post on Thursday and confirmed Friday by UPI with a CDC spokeswoman, researchers with the agency suggest that even these new recommendations may not go far enough.

The memo describes “universal masking” as “essential” in stemming the spread of the Delta variant.

It also indicates that the variant is more transmissable than influenza and smallpox, as contagious as chickenpox and causes significantly more severe infection than previous strains of the coronavirus.

The cases described in the new CDC report published Friday occurred in the aftermath of July 4 celebrations in the resort community of Provincetown, Mass.

Of the 469 COVID-19 described in the report, 346, or 74%, involved people who were fully vaccinated with either of the two-dose Pfizer-BioNTech or Moderna shots, the CDC said.

Among the 462 cases, 133 virus samples underwent genetic testing and 119, or 89%, of them came back positive for the Delta variant, which is believed to have originated in India.

Of the 346 so-called “breakthrough” cases in fully vaccinated people, 274 experienced symptoms of COVID-19.

The Massachusetts findings are “a canary in a coal mine,” public health specialist Eric Feigl-Ding told UPI.

They show “that vaccinated individuals infected with Delta may be able to transmit the virus as easily as those who are unvaccinated, though vaccinated people likely are at lower risk of infection setting in,” said Feigl-Ding, a senior fellow at the Foundation for American Scientists in Washington, D.C.

As of Thursday night, 164 million people, or 49% of the population, in the United States had been fully vaccinated against the virus, according to CDC data.

States and cities “might consider expanded prevention strategies, including universal masking in indoor public settings, particularly for large public gatherings that include travelers from many areas with differing levels of [virus] transmission,” agency researchers wrote.

Actor Psalm Adjeteyfio lay curses on the head of those mocking him for being opanyin toto and begging for money after working for several...