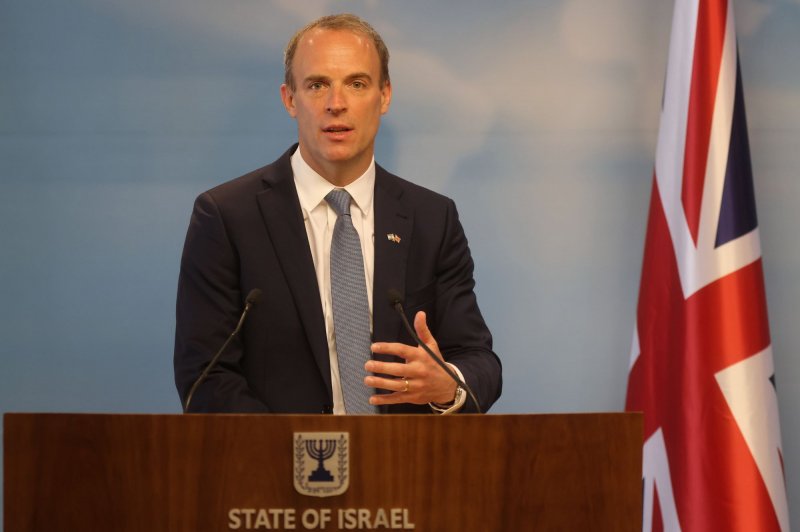 Aug. 1 (UPI) — Britain and Israel on Sunday both blamed Iran for an attack on an oil tanker that killed two people, while Tehran denied involvement.

British Foreign Secretary Dominic Raab described the attack on the Mercer Street tanker off the coast of Oman in which a Briton and Romainian were killed on Thursday as “deliberate, targeted and a clear violation of international law” adding that the nation has concluded it is “highly likely” that Iran carried out the attack” using one or more Unmanned Aerial Vehicles.

“Iran must end such attacks and vessels must be allowed to navigate freely in accordance with international law,” said Raab. “The U.K. is working with our international partners on concerted response to this unacceptable attack.”

Israeli Prime Minister Naftali Bennett escalated the accusation during a cabinet meeting saying that Israel has intelligence evidence stating Iran was behind the attack.

“I say absolutely that Iran is the one that carried out the attack against the ship,” said Bennett. “The thuggish behavior of Iran is dangerous not only to Israel but also to the global interest in freedom of shipping and international trade.”

“The illegitimate occupying regime of Israel must stop the false accusations,” said Khatibzadeh.

“This is not the first time that the Zionist regime has made such accusations against Iran. This regime has taken violence and insecurity with it wherever it has gone.”

London-based Zodiac Maritime, which operates the Liberia-flagged vessel and is owned by Israeli businessman Eyal Ofer said the tanker was attacked by pirates as it sailed from a port in Tanzania to the United Arab Emirates despite carrying no cargo.

The British Maritime Trade Operations listed the incident, however, as “non-piracy” and cautioned other ships in the area to be alert.

A security official said the crew reported hearing drone noises followed by explosions and eruptions in the water.

The boat then went radio silent and its driver and a security detail, including the Briton who was killed, remained on the bridge to pilot the ship and were struck by the attack.

A U.S. Navy escort was able to assist the ship in sailing away.

Truckers to converge on Ottawa for protest towards vaccine mandates