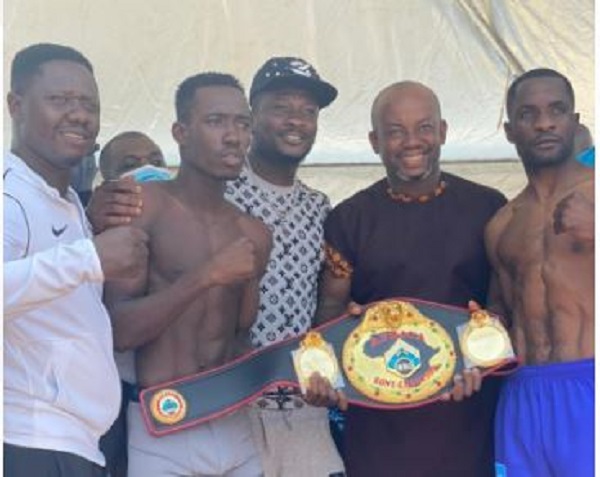 John Laryea with Asamoah Gyan, Sammy Anim and his opponent Sebastianus Natanael at the presser

Confidence is the high in the camp of National Featherweight champion John Laryea that victory will be chalked in his World Boxing Organization (WBO) title fight against Tanzanian boxer Sebastianus Natanael.

The two boxers will face-off today, July 30, 2021, at the Bukom Boxing Arena in a WBO Africa featherweight title.

Addressing a crowd of supporters and media practitioners on Wednesday, July 28, 2021, John Laryea vowed to beat the Tanzanian and annex the title.

“This is me John Laryea, I say what I can do and I know myself; I will stop him,” Laryea told a packed crowd at the MJ Grand Hotel in Accra.

Natanael however indicated that he is unfazed by the home support and will mount a successful defense of his title.

“He can make all the noise but I will silence him in the ring,” he noted. Samir Captan the WBO Africa Supervisor charged the two boxers to sell great fight to their fans who will troop to the Arena to watch the bout.

“I expect to see a good fight from both boxers to make the night an enjoyable one for the teeming fans who will be around,” he noted.

Other fights on the night included a contest between Daniel Gorsh and Emmanuel Laryea while Jacob Dickson will take on Stephen Abbey in a cruiserweight fight.

Joseph Akai Nettey and Thomas Quansah will fight in a flyweight contest, Michael Mensah versus Issah Inusah in a light-heavyweight contest, with a lightweight clash between Tackie Annan and Amadu Seidu.

Other lightweight clashes will see Eric Korley facing Benjamin Sackey and Sherrif Quaye and Ben Akrah facing off, while Jacob Laryea and Richard Dogbegah battle it out in a welterweight fray.