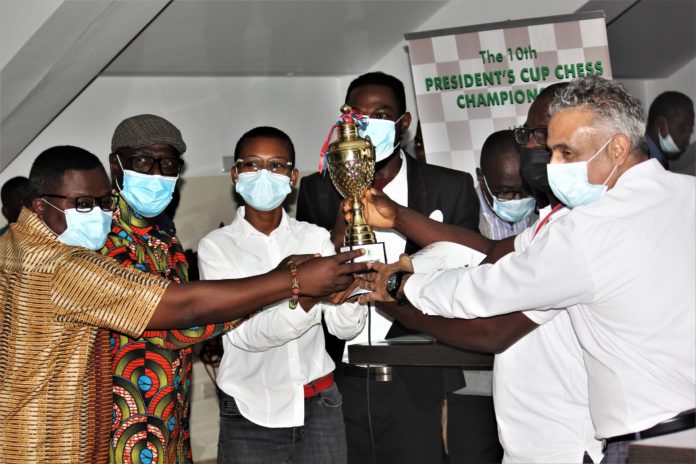 Reiss & Co Ghana Limited has donated an undisclosed amount of money the Ghana Chess Association (GCA) to assist the Association in the development of the sport in Ghana and beyond.

The presentation was made on behalf of Reiss & Co by Ms. Martina Tsinaku and Mr. Raymond Mamattah at the closing ceremony of the 10th edition of the Ghana Chess Presidents Cup held at the VVIP Lounge of the Accra Sports Stadium, Accra.

According to the representative from Reiss & Co, it is a known fact that Chess is a minority sport in Ghana and people presume it is for the wealthy, but he sees it to be the cheapest game to play.

He also noted that the perception of chess being for the rich was strange to him because Chess is for everyone and the good thing about it is that it does not matter the age or the gender.

“I want to see the sport develop in strength and in numbers, making it competitive and attractive. Students who play chess have better academic results,” he said.

This year’s 10th Presidents Chess Cup Championships is so far the most keenly contested in years.

Twenty four (24) players across the globe played in a Swiss format with the aim of becoming the 10th edition Champion and increased individual ratings.

Best Junior positions went to Richardson Mawuli and Acheampong Dave Quansah Chief, both players from Ghana with a total score of 4 points out of the 9 games played.

The President of the Ghana Chess Association, Mr. Philp Ameku, who was happy with the final results, urged government to make the game of chess part of the educational or sporting curriculum of the Basic and Second Cycle schools and also expressed his gratitude and promised to develop and promote the sport across the lengh and breadth of the country with plans to reach the community and schools.

According to him, chess is one of the most powerful educational tools available to strengthen a child’s mind. It enhances the concentration, patience and perseverance of an individual.

It also develops his or her creativity, intuition, memory and ability to analyze and deduce from a set of general principles how to make tough decisions and solve problems.

He further mentioned that the game should be taken seriously as it is one of the games Ghana could win medals given the needed sponsorship, motivation and support.

The Vice President of the Association, Ms Christiana Ashley, further indicated that funding has been the major bane to the growth of the game in the country.

She pleaded with corporate bodies to come to their aid and went on to thank His Excellency the President of the Republic, Nana Addo Dankwa Akuffo – Addo, Ministry of Youth and Sports, Ministry of Education, National Sports Authority and Reiss and Co for their assistance in making this year’s championships a success.

The tournament was initiated by the then Ghan Chess President, Air Commodore George Arko – Dadzie of which is currently rated internationally by the World Chess Federation (FIDE).