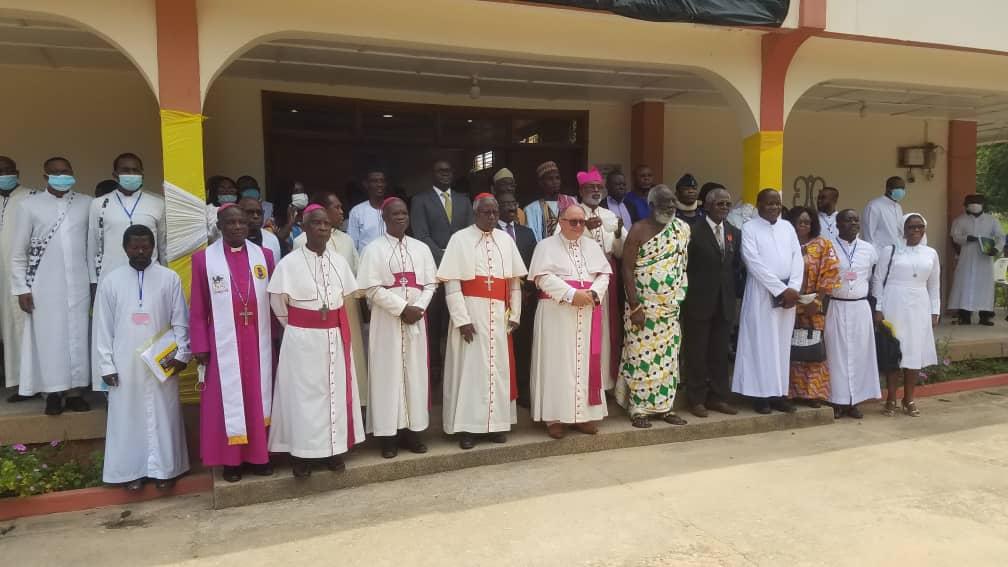 The second Synod was held in Cape Coast

The second Synod of the Catholic Archdiocese of Cape Coast has opened at the St. Peter’s Regional Seminary at Pedu with a call on the Church to intensify its social teachings to adequately respond to the increasing social and moral vices gradually overwhelming the Ghanaian society.

The five-day Synod, on the theme: “Baptised and Sent: Our Call to Holiness and Mission in the Archdiocese of Cape Coast in Preparation for the 150th Anniversary of the Catholic Mission in Ghana,” is being attended by over 150 delegates from the Archdiocese.

Mrs Justina Marigold Assan, the Central Regional Minister, who made the call, said the Church must treat the issue as a matter of urgency under its missionary assignments of propagating its social teachings of self-denial, tolerance, fairness, honesty, love and humility.

“It is my firm conviction that if Catholics and for that matter Christians will adopt and practicalise the social teaching principles in their various homes and work places, the world and Ghana in particular will be a peaceful and less stressful place for all to live,” she said.

She said it was not enough as Christians to use only the pulpit to propagate the gospel but with exemplary lives also to encourage others to want to follow Christ.

That, she said, required that members of the Church eschewed all negative tendencies that could hamper the successful accomplishment of the divine goal of winning souls for Christ.

“As Christians, we must follow the examples of Jesus Christ. You must constantly guard against all negative tendencies that can mar the objectives of the Catholic Church. You must intensify the joy of preaching the gospel of the Kingdom of God wherever you find yourselves and by so doing, it will draw more people to admire, worship, trust, follow and obey God,” she said.

Mrs Assan said the Catholic Church was in high esteem in Ghana for its contributions towards national development in the form of schools, hospitals and other social services spread across the length and breadth of the country.

That high sense of social responsibility, she said, resonated with the Government’s policy of forming effective partnership with private institutions such as religious bodies, NGOs and CSOs, who shared developmental aspirations to move the fortunes of the country forward in an appropriate direction.

In that regard, she admonished the Catholic Church to continue to tailor its developmental plans to be in line with that of the Government for the common good of the people of Ghana.

The Regional Minister encouraged the Church to take advantage of its diversity and support for one another to strategically position itself for the success of members, which would ultimately culminate into the collective success of the Church and the State in general.

Most Reverend Charles Gabriel Palmer-Buckle, the Metropolitan Archbishop of Cape Coast, said the theme for the celebration was to help the Catholic Church to look into the past of its mission and to sharpen its vision for the next decade when it would be celebrating 150 years of uninterrupted Catholic evangelism.

He said while celebrating the imposing missionary heritage at the Synod, the Church had the responsibility to continue to sustain the mission within the great commission of the Lord Jesus Christ in a rapidly changing and very complex social setting of today’s world.

Most Rev. Palmer-Buckle said the five-day synod was a platform for the generation of ideas, which would serve as the basis of the future direction of the Church, with respect to the impending 150th anniversary celebration.

Archbishop Henry Mieczyslaw Jagodzinski, the Apostolic Nucio of Ghana, who spoke on the core foundation of the Catholic Church, said the Church was synonymous with the Synod, adding that Synod offered a dynamism between listening and hearing and the church that hears and listens, was in Synod.

Representatives of the Ghana Catholic Bishop Conference, the Muslim community, Local Council of Churches among others offered fraternal messages, most of which centred on religious tolerance.