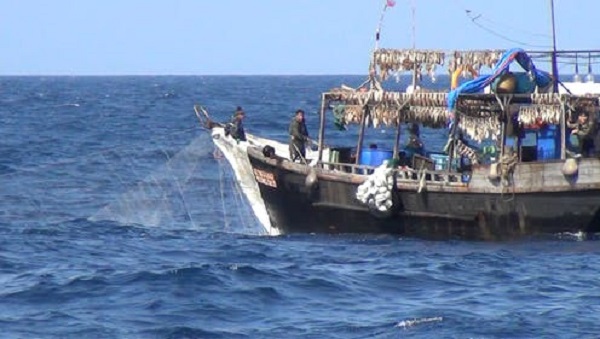 The Environmental Justice Foundation (EJF) has charged the Government of Ghana to launch investigations into allegations of gross human right abuses and labor violations in the country’s industrial fishing industry.

The Government, the Foundation- an environmental and human security group- said should take the necessary actions to remedy the abuses identified in the sector, and strengthen the legal protection of human rights of workers on fishing vessels.

Presenting a report of a study on human rights abuses in the fisheries sector at a stakeholder meeting in Accra on Thursday, Mr. Socrates Apetorgbor Segbor, Fisheries Program Manager, EJF, also urged the government to address the issue of forced or slave labor in all economic sectors, particularly in the fishing industry, in accordance with the International Labor Organization Conventions and national and international standards.

According to him, the study, conducted among fishermen and fish workers in five communities in the Central Region, revealed widespread and destructive illegal practices in the industrial fishing sector.

He said the research revealed that there were concerns that the Fisheries Observer program, where public officers were stationed on board fishing vessels for varied roles including reporting fisheries violations, was substantially compromised by bribery, threats and corrupt practices, which impeded effective reporting and follow up on illegalities at sea.

Mr. Segbor disclosed that study showed that the overwhelming majority of the trawler vessels are operated by Chinese corporations and captained by their nationals, in contravention of the Fisheries Act, Act 625, Section 47, Sub-section 1(a)

Act 625, Section 47, Sub-section 1(a) defines a local industrial or semi-industrial fishing vessel as one owned or controlled by a citizen, the government, or owned or controlled by a company or partnerships registered by law in the Republic which has its principal place of business in the Republic and the share of which is beneficially owned wholly by the government, a citizen, a public.

But the Chinese, who operate this vessels, occupy the more senior positions including Captain, Chief Engineer, Chief Officer, and Engineer with Ghanaian nationals taking up the remaining roles (boatswain, fish master, crew).

The EJF Fisheries Program Manager said the Chinese trawl fleet in Ghana operated under a veil of secrecy, using a network of front companies.

According to the report, some 10 crew members interviewed had personally experienced or witnessed physical abuse at the hands of Chinese captains and officers.

The crew members who pleaded to be treated anonymously sharing their experiences said: “So as we are grading the fish they will come and if you are not selecting well, then they will use their leg to boot you.

“When we pour the fish, those who are not fast, the Chinese captain will take anything he will get, whether stone or anything and hit you with it.

“A captain hit a Ghanaian cook four times after seeing the cook preparing fish soup for the Ghanaian crew. The Captain then poured the soup into the sea. Even when you overwork and are tired, you can’t rest, because they will scold you that you are lazy,” the study reported.

According to the study, one of the 10 crew members also disclosed that “A Captain on a vessel that was engaging in illegal discarding of fish at sea allegedly pushed a fisheries observer and threatened to hit him with a stick if he tried to report on the incident.”

“I have seen observers taking money from the Chinese nationals. I witnessed it myself. They gave the observer money, he (the observer) told me the Captain gave him GH¢1,500.00,” said the report.

Mr. Segbor said per their study, some of the observers felt they had no option than to accept the bribes as they feared for their lives at sea.

He entreated the government and stakeholders to work together to ratify and implement key international instruments to protect workers on fishing vessels.

He also encouraged civil society organizations to raise awareness among workers in the industrial fishing sector on their rights under national, regional and international law and the judicial and non-judicial mechanisms available to access remedies for abuses.