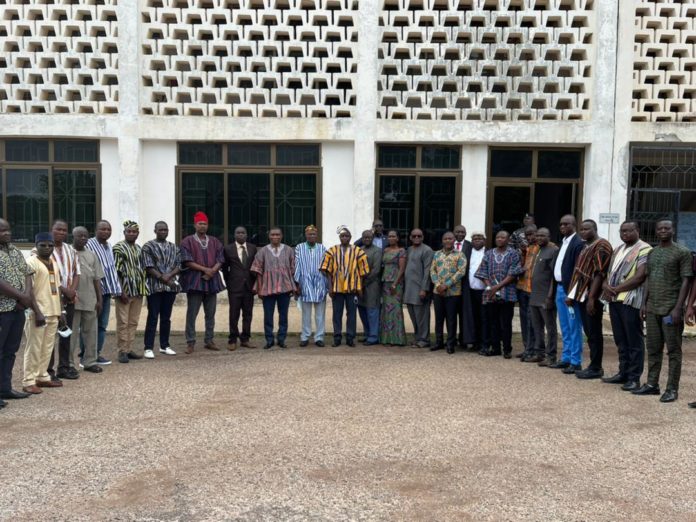 George Mireku Duker with members of the council

He begun by congratulating the members who have been chosen and given the prerogative of serving the Region and Ghana as a whole. He urged them to bring on board skills to be able to deliver on their mandate. ” This is a call to duty and you cannot fail the good people of the region” he added.

The Upper East Region, he said, is made up of 15 districts with a population of about 1.3 million inhabitants who are mostly peasants engaged in subsistence farming. With a land size of about 8,842sqkm, settlement are quite dispersed with few dense localities leaving vast lands lying fallow.

This situation, according to the Deputy Minister is seen as an opportunity for larger scale investment in land for agriculture and allied uses for the benefit of the citizenry.

Fortunately, the good people of this Region have in recent times, gradually been awaken to and embraced the concept of land as a valuable natural resources that must be put to optimum use and at the same time preserved for prosperity, he said. He indicated that, he t has no doubt that measures that will be championed by the Lands Commission will meet the aspirations of the people.

Mireku Duker mentioned that “Let me assure you that, the Ministry of Lands and Natural Resources will continue to partner with the Lands Commission to deliver on it’s mandate”.

It is my Prayer that the Almighty God will grant you wisdom to work honestly to help develop the land economy of the Upper East Region, he concluded.

On his part , the Upper East Regional Minister, Hon. Stephen Yakubu, spelt out the land tenure system in the area saying it appears different from many parts of the country, and added that its is incumbent on this Commission to take conscious efforts at educating land owners and traditional rulers on their expected roles in the management of lands to avoid related conflicts.

“Indeed, the desire to reap huge gains from land is robbing the state of required lands for publish interest investment” he pointed out. We have to work at changing attitudes and mindsets to move our region and country to the next level, He opined.

The Executive Secretary of the Lands Commission, Alhaji Sulemana Mahama admonished the members to manage their expectations because resources are scarce and that will require them to work extra harder to achieve their set target. He pleaded with them to throw their weight behind the new Regional Lands Officer to help him push the reforms in land administration. END.