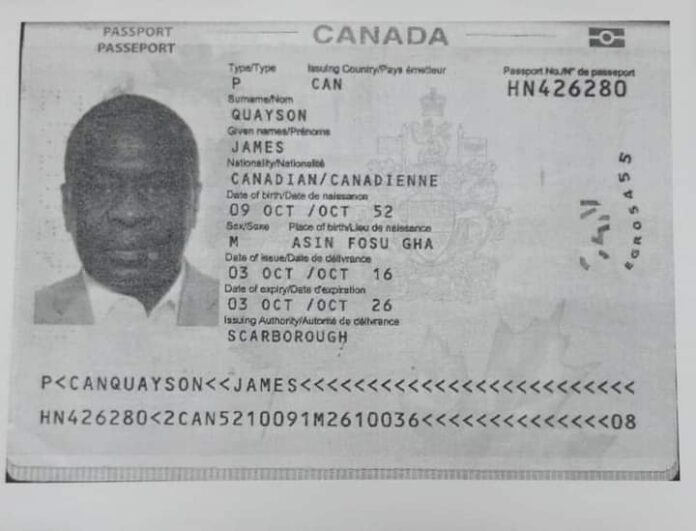 A photo of the embattled MP’s Canadian passport

The July 28, 2021 ruling by a Cape Coast High Court that Member of Parliament for Assin North, James Gyakye Quayson, ceases to hold himself as a lawmaker till he contests in a new election is the latest twist in a saga that involved legal and political jostling.

There are shouts of vindication by the ruling New Patriotic Party and vows of seeking redress from the main opposition National Democratic Congress, NDC, whose candidate has been thrown out of Parliament.

But the issue started from the filing of nomination forms of the then NDC-candidate, his election, a High Court case that attracted a Supreme Court ruling and of course the chaos which rocked Parliament till the ‘cease and desist’ verdict of the Cape Coast High Court.

Sometime in 2020, after securing his party’s nomination as a Parliamentary candidate, Quayson went ahead to file his papers to contest for the Assin South constituency seat.

Then the issue of his dual citizenship popped up, that he was a citizen of Canada at the time of the election, thus did not have the right to file his candidacy let alone run in the election.

Center of controversy in Speakership vote

James Gyakye Quayson was allowed to cast his ballot in the voting process for a new speaker on January 7, 2021 after a rancourous process in which the NPP caucus insisted that there was a court injuction against his election.

The court had asked that he desists from holding himself out as a lawmaker after one Michael Ankomah-Nimfa of Assin Bereku filed a case against his citizenship status.

The clerk of Parliament subsequently allowed him to vote in the process that produced Alban Bagbin as Speaker of the House.

Minority leader Haruna Iddrisu had argued that courts do not determine who becomes MP whiles the majority swore to cite him for contempt of court.

Case rolls on, goes to Supreme Court for interpretation

Back in the Cape Court High Court where the case was originaly filed, the MP’s lawyers at a point moved to the Supreme Court seeking the apex court to invoke its supervisory jurisdiction over the case relative to the MP’s dual citizenship.

But the court dismissed the case citing the fact that the High Court had not made any ruling on the issue for which the petitioner had come seeking the apex court to act.

The Justice Yaw Appau-led bench said, the application ought to have been first raised at the High Court for a determination.

This cleared the way for the High Court to deliver judgment.

The High Court on Wednesday July, 28, 2021 passed a verdict on the election petition against the Assin North MP, James Gyakye Quayson.

The court presided by Justice Kwasi Boakye upheld the argument of the petitioner, confirming that James Quayson was not qualified to contest the 2020 elections.

The basis for the ruling is that at the point of filing to contest the elections, the court claims James Quayson had not successfully renounce his Canadian citizenship.

The Central Regional Secretary of the ruling New Patriotic Party has filed a petition at the Criminal Investigations Department of the Ghana Police Service, demanding that James Quayson be investigated for committing perjury.

Richard Techie-Mensah told Citi News on Wednesday, July 28, 2021 that James Quayson lied to the state during the filing of nomination forms for the 2020 elections.

He claims that James Quayson told a judicial officer then that at the point of filing his forms in October he owed allegiance to no country aside Ghana.

Following the ruling by the Cape Coast High Court, Richard Techie-Mensah is of the view that James Quayson committed perjury by lying under oath and must be prosecuted for same.