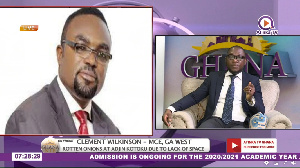 The Municipal Chief Executive Officer (MCE) of the Ga West Municipal Assembly, Mr Clement Wilkinson says he is surprised at the attitude of some of the Adjen Kotoku onion sellers who are claiming they do not have enough space to keep their products.

The Government issued a seven-week ultimatum to the onion traders to relocate from Agbogbloshie to Adjen Kotoku, where a new market, which was established over a decade had been allocated to them.

This was part of measures taken to decongest the Central Business District.

After resisting all attempts to relocate from Agbogbloshie to Adjen Kotoku, the onion sellers finally moved to Adjen Kotoku on Thursday morning, July 1,2021.

Although it was reported that onion market was booming at Adjen Kotoku, some of the onion sellers claimed that the onions are going bad because their shelves are smaller and that they do not have proper storage space for the onions.

Speaking on Atinka TV’s morning show, Ghana Nie, with Ekourba Gyasi Simpremu, the MCE said he went to the market but none of the Adjen Kotoku onion sellers complained to him about their supposed situation.

“They do not put the onions under sheds, they put them in vehicles and bring them and we do not know how long it takes on the road. As soon as they land, they offload it for people to come and buy it in bulk and send it to the various markets.

“When you watch the pictures, you would realise that they all put the onions on the sun and so if they are complaining that the sheds are small and so their onions are going bad, I bet to differ from them because I do not know exactly what they mean,” he said.

The MCE said the onion sellers had enough sheds that they had given some out to their friends and families to sell food and pray, adding that the onions could have been put there if the sellers really needed sheds to cover the onions.

He said he will meet with the authorities to deliberate on the way forward.