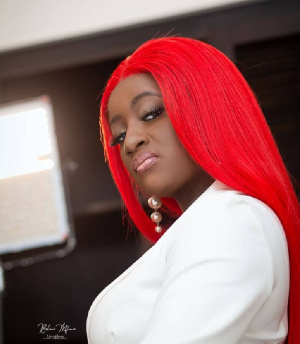 It turns out that a lot of the celebs who have taken to social media to express worry about the tight corner former socialite, Moesha Buduong finds herself following her decision to become a born-again Christian is just a scam to deceive the public and their followers.

According to TV presenter, Sandra Ohemeng, popularly called Sister Sandy Bi Y3 Guy, a lot of these celebs have actually been mocking Moesha Buduong in a group they belong to.

Sister Sandy took to her social media pages to call out these Ghanaian celebrities who have been mocking Moesha in a WhatsApp group after she became a hot topic on social media.

In a video sighted by zionfelix.net, the entertainment TV host disclosed that some celebrities shared voice notes in their WhatsApp group to deride their repented colleague star.

“Could you believe that your celebrities have a WhatsApp group, and yesterday, some of them were mocking Moesha? I have the audio of them laughing at Moesha…I wanted to play the audio but I don’t like it when people are disgraced or berated because the internet does not forget, and I’m also a woman,” Sister Sandy said.

The television show host claimed one of the women in the group, who came out to ask to be forgiven after she delivered raunchy photos on social media (Christabel Ekeh) was also among the members ridiculing born-again Moesha Buduong.