Ken Agyapong’s ‘demigod’ conduct must be a concern to all 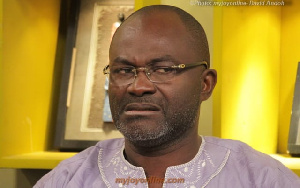 Member of Parliament for the Builsa South Constituency Dr Clement Apaak has pointed out that the issue with the Assin Central legislator Kennedy Agyapong must concern every Ghana because his utterances and conduct have constantly bordered on the issue of threats, blackmails and intimidations towards his political opponents in the country.

He said unless Ghanaians want to play the ostrich by hiding their heads in the sand, they must admit that the Assin Central lawmaker is behaving like a ‘demigod’ unto himself, that even the powers that be are afraid to hold him accountable and to tell him that his conduct is unacceptable.

Dr Apaak said this is the reason why his party stalwarts like Dr Wereko-Brobby and many other Ghanaians have called on President Nana Akufo-Addo to make a comment on the subject to dissociate himself from the spurious comments by Mr Agyapong about beating up a journalist if he were the president.

The National Democratic Congress (NDC) lawmaker said Mr Agyapong is not just an ordinary MP but the Chair of the Defence and Interior Committee in Parliament and an influential member of the New Patriotic Party (NPP) but was never condemned in any of the attacks he levelled against the late Ahmed Suale, Anas Aremeyaw Anas and now Erastus Asare Donkor and the likes in the country.

“The issue of Honorable Kennedy Agyapong is an issue that should concern any Ghanaian and unless we want to play the ostrich, we must admit that his pronouncements constantly, his conducts constantly has always bordered on issues of threats, issues of blackmail, issues of intimidation and it’s as though he is a demigod unto himself that even the powers that be are afraid to hold him accountable and to tell him that his conduct is unacceptable,” Dr Apaak charged on the New Day on TV3 on Monday, July 19, “that is why the call by the likes of Dr Wereko-Brobby and many other Ghanaians to the President to make a comment to dissociate himself with a commentary that suggests that the President will somehow condone the violation of the rights of another citizen.”

He continued: “First of all, Kennedy Agyapong is not an ordinary Member of Parliament, we all know that we also know that he is a very important member of the ruling NPP. He says it himself about his capacity, what he can do and what he has done. You know all of these that we are talking about, from the threat on Ahmed Suale, the way he treated Anas with his own counter initiative and all the other persons who have been victims of his pronouncements, have you ever heard the NPP officially disassociate or condemn his conducts? They can’t for whatever reason.”

Dr Apaak further opined that when he heard that Kennedy Agyapong has been made the Chairman of the Defense Committee he cringed because he is somebody who has the tendency to issue threats or violence, somebody who can boast about not having regard for the security apparatus and the Judiciary in the country.

He was speaking on the backdrop of the threats Kennedy Ohene Agyapong levelled against Multimedia Group journalist Erastus Asare Donkor, who testified at the just-ended three-member Ejura Committee hearings.

The committee has been tasked to investigate the arbitrary shooting by military officers into unarmed protesters in Ejura on June 29, 2021, after the brutal murder of #FixTheCountry campaigner Ibrahim Anyass Mohammed.