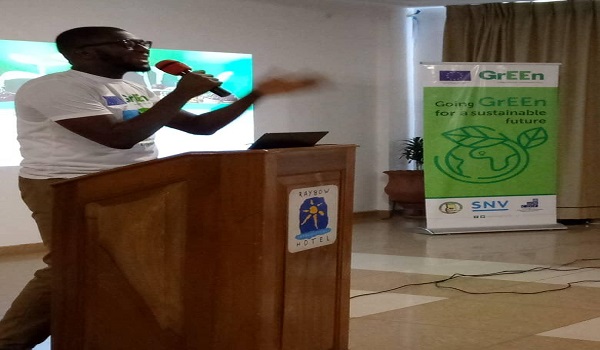 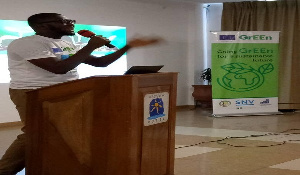 Industry players in the agriculture space have been engaged and reminded of the need to rethink climate-smart agriculture to save the environment while increasing their yields.

The depletion of the horizon by in-actions of mankind is gradually presenting a looming environmental crisis that must be tackled hand on.

The engagement, organized by SNV Ghana falls under the “Boosting Green Employment and Enterprise Opportunities in Ghana (GrEEn) project”.

The Green project is a four-year action from the European Union, the Embassy of the Kingdom of the Netherlands in Ghana, SNV Netherlands Development Organisation and the United Nations Capital Development Fund (UNCDF).

The Agricultural Advisor with SNV Ghana, Mr. Wisdom Konwuruk, said the effects of climate on Agriculture was becoming very significant and a cause to worry about, hence the need for mitigative measures particularly in the agriculture sector to avert poor yields, low income and rather promote best practices that were environmentally friendly.

He stated that the climate-smart concept included mixed cropping, integrated farming systems, organic farming and crop rotation among others.

The Agriculture Adviser stressed the need to expose farmers to the concept of smart agriculture bearing in mind changes in weather and rainfall patterns.

He also mentioned some techniques like, Ripping technology which promoted row planting and saves energy as less land was used, adding, “whereas basin technology is an appropriate means of retaining water around planted seeds, this method is not suitable for areas in the Western Region”.

Mr. Konwuruk also explained the soil cover technology as a method where crop residues were distributed on the farm uniformly without burning them.

This according to him, was to ensure that nutrients were reabsorbed from cut stalks back into the soil.

The Advisor, encouraged that leguminous crops like, groundnuts and beans should be mixed with other crops to ensure that the land got the needed nutrients for crop growth.

Mr. Konwuruk said with the surge in fossil emissions from machines and cars, deforestation leading to greenhouse effects that affected climate patterns, the best way of generating a higher profit and ensure food security was the adaptation of Climate-Smart Agriculture.

Mr Konwuruk said the SNV Ghana had devised a training method in conjunction with the Ministry of Agriculture to train and mentor some farmers in the subject area.

Mr. Michael Abrokwaa, the Energy Adviser of SNV Ghana, said his organization was implementing some Green intervention in the Region to create greater economic and employment opportunities for youth, women and returning migrants by promoting and supporting sustainable, green businesses.

Currently, their Green Programme run in Ashanti and Western is being implemented under the European Union Emergency Trust Fund (EUTF) for

Mr. Abrokwaa said as part of the Green Project, SNV Ghana and UNCDF were partnering with the Private Financing Advisory Network (PFAN), GIZ Ghana and the British Council to organise a three-day Green SME Trade Show to highlight and showcase green businesses in the Western Region.

The Energy Adviser added that an exhibition was also mounted for existing players to showcase what can be done and encouraged new entrants adding, “We want Western Region to know the sector is profitable while enhancing sustainability.”