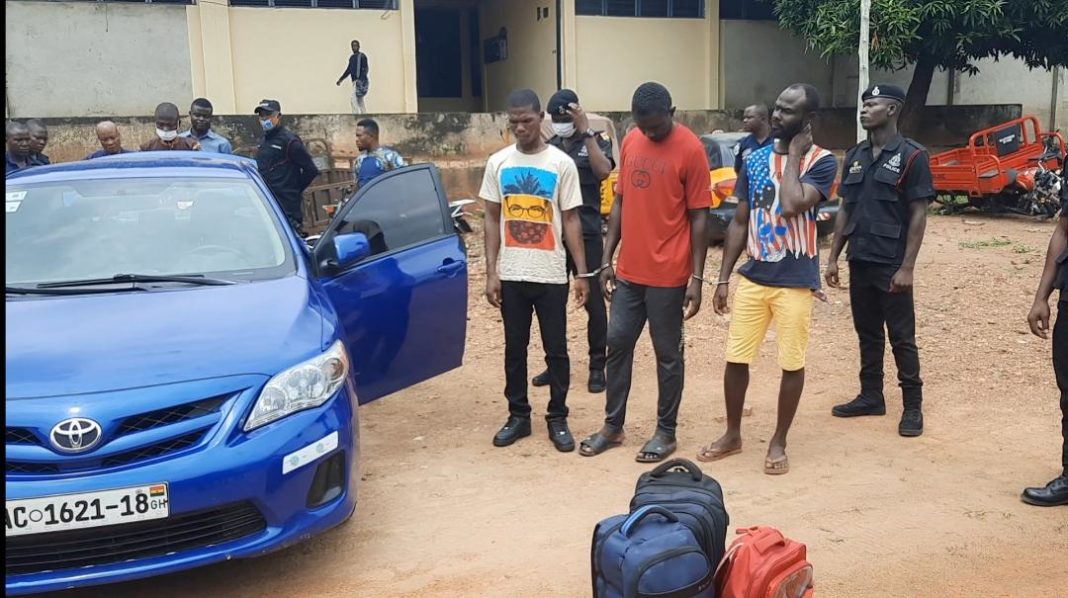 Three persons have been remanded into police custody by a Magistrate Court in Ho presided over by His Worship Robert Addo for illegally possessing firearms.

The suspects who were arraigned on July 9, 2021 and are currently assisting the police with their investigations are expected to re-appear before the court on July 22, 2021.

The trio, Nervis Otu Laryea, 33, Ebenezer Osei, 38 and Mohammed Muntaka Mubarak, 38 years old, were arrested on July 6, 2021 by the Police Rapid Deployment Force Patrol team along the Kpando-Have road in the Volta Region.

They were travelling in a blue Toyota Corolla with registration number, AC -1621 -18. Upon routine interrogation and a thorough search, the Police found three foreign pistols with 40 rounds of 9mm ammunition stashed in a hidden compartment of the vehicle. They also found two Toshiba laptops and 27 assorted mobiles phones with price tags as well as two hoody pullovers -black and green.

Upon police interrogation, suspect Mohammed Muntaka Mubarak narrated that he obtained the mobile phones from a man he does not know at Alavanyo Wudidi in the Hohoe Municipality of the Volta region. He had no receipts to substantiate the transaction with whoever he claimed to have bought the phones from.

Suspects Nervis Otu Laryea and Ebenezer Osei on the other hand claimed they offered a lift to suspect Mohammed Muntaka Mubarak on their way from Alavanyo; where suspect Ebenezer had gone to visit a shrine for spiritual assistance to boost his business.

Further investigation by the police revealed that the Toyota Corolla with registration number AC -1621-18 was also acquired by suspect Nervis Otu Laryea at Afienya, near Tema in the Greater Accra region from someone from Togo, but without documents. 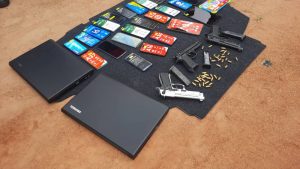 The Volta Regional Police Commander, DCOP Edward Oduro Kwanteg in a media briefing said investigations were ongoing and that the police will ensure they got to the bottom of the matter.

He appealed to the public to always cooperate with the police to fight crime in every part of the region, including the roads. He said, “We wish to assure the public that we are committed to fighting all forms of crime within our area of responsibility, especially violent crimes and therefore, we need the public’s support.”

“The motoring public is encouraged to at all times cooperate with the police on the road. We do not take delight in wasting the precious time of the travelling public, but sometimes there is the need to go the extra mile in our search.”

“The three foreign pistols were concealed in a false compartment in the car and without careful and painstaking search, they would have eluded us. This is one sure way of preventing the commissioning of crime,” he added.