Refund all allowances paid to you since Jan. 2009 – John Boadu charges Lordina Mahama 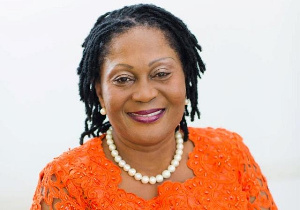 The General Secretary of the ruling New Patriotic Party, John Boadu, has charged the wife of former President John Dramani Mahama, Mrs. Lordina Mahama, to refund all monies or allowances paid to her between January 2009 and June 2021.

In a one-on-one interview with Paa Kwesi Schandorf on TV Africa on Tuesday, 13th July 2021, Mr. Boadu admonished Mrs. Lordina Mahama to replicate the gesture made by Mrs. Rebecca Akufo-Addo.

“Schandorf, let me say this emphatically. Former President Mahama’s wife, Lordina Mahama, must, as a matter of urgency, refund all monies paid to her since January 2017 till now. Those she received as far back as 2009 should also be refunded. The monies she has received from that time till now would amount to GHC3.2 million.” JB said.

The Ghanaian media landscape has been awash with criticisms of the Ntiamoah Commission’s decision to regularize allowances paid to First and Second Ladies, whether past, present or in future.

An impression was created by a section of the general public including the TUC, NDC and some civil society organizations that only Mrs. Rebecca Akufo-Addo and Hajia Samira Bawumia are beneficiaries of these allowances being turned into salaries.

These misconceptions and vitriolic attacks have led to the First Lady declining the decision of the Committee and indicating her decision to refund all monies paid to her since January 2017.

Kidi Laments On How Critics Keep Comparing Him To Kuami Eugene