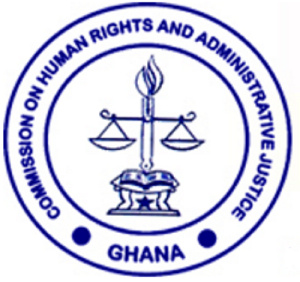 The Commission for Human Rights and Administrative Justice

• CHRAJ has received a petition, demanding probe into the payment of emolument for spouses of presidents and vice presidents since 2000

• They also want CHRAJ to demand a refund where necessary

The Commission for Human Rights and Administrative Justice has been petitioned to probe the payment of allowances to spouses of Presidents and Vice Presidents from the year 2000 to 2021.

The petition was filed at the Ashanti Regional office of CHRAJ by three persons Keskine Owusu Poku, Victor Osei-Poku and Michael Essel-Mills who describe themselves as ‘citizens of Ghana.’

In the petition sighted by GhanaWeb, the group tabled four requests to CHRAJ from which they seek clarity.

They want CHRAJ to “investigate the legal propriety of the payment of allowances to wives of incumbent Presidents and Vice Presidents, and demand a refund of same if found inappropriate, investigate a possible case of conflict of interest in the determination of the amount paid as allowance to incumbent First and Second Ladies at the time of payment and make a disclosure of the entire amount paid to all sitting First and Second Ladies (on individual basis) from 2009 to 2021.

They also want CHRAJ to: “Make consequential orders and recommendations for the consideration of the State.” The petition follows recent discourse on emoluments for first and second ladies on the back of the formalization of recommendations of the Professor Ntiamoa-Baidu-led committee.

The committee recommended payment of salaries to the spouses of the President and Vice as part of benefits enjoyed by the president and his vice.

The recommendation has been opposed the National Democratic Congress with two of their MPs suing the government at the Supreme Court over the constitutionality of the new arrangement.

Discussions on the emolument has compelled First Lady Rebecca Akufo-Addo to reject the recommendations and also refund all amount paid her as allowances since she assumed the role in 2017.

Samira Bawumia, the wife of the Vice President has also done same.

Read the full petition below