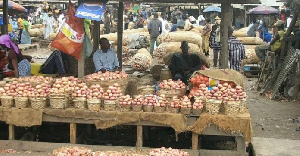 Mr Sumaila Iddi Zanzeh, Chairman, Progressive Onion Sellers Association, has appealed to Government to fulfil promises made to them to improve their businesses.

He said the promises included the expansion of the new market to accommodate more onion sellers, the construction of toilet facilities, provision of garbage bins, and reconstruction of roads to the market.

Mr Zanzeh, in an interview with the Ghana News Agency (GNA) at Adjen Kotoku, said the construction of the roads would help customers from towns such as Takoradi and Kasoa to access the market.

The Chairman said the Government had provided mobile toilets and a garbage container for them but were not enough and that they needed smaller bins for their sheds to help with waste collection.

He called on Government to reduce fuel prices to stabilised transportation fares to be reduced.

Mr Zakari Ibrahim Zanzeh, an onion seller, said business and sales had been slow since they relocated to the market, and anticipated that it would soon pick up since the market was new.

He commended Government and Mr Henry Quartey, Greater Accra Regional Minister for providing them with a better place to do businesses however, he said the market was far and small to accommodate all the sellers.

He said, “Because the market is small, some of our members have gone to Kasoa and we are divided, and that will affect us, we are losing our customers because they say the market is far and some cannot even locate the market.”

A visit by GNA revealed that construction works on sheds for the onion sellers were in progress.

The sellers who were trading at Agbogbloshie, were relocated to Adjen Kotoku to make way for the decongestion and beautification of the highly toxified area.