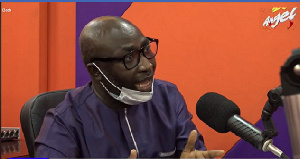 General Secretary of the Ghana Football Association, Prosper Harrison Addo, has said the remuneration of match officials shouldn’t be a reason for poor performance in games.

Reacting to claims that referees don’t get paid on time, thus affecting their performance, Prosper Harrison Addo said referees are supposed to act as professionals and officiate games properly even when they haven’t been paid.

He was speaking at the forum organised by 3Sports in collaboration with the GFA on hooliganism.

“It must not be taken that because a referee’s fee is a certain amount or has not been paid, then the referee is permitted to officiate badly. That excuse must be nipped in the bud.

“I’ve heard people complain on radio. There is nowhere in the world that you compare performance with payment. We don’t do that. You are a professional referee and you must officiate professionally.”

He added that all over the world, remuneration of referees delays just as it is in Ghana.

“Referees at the World Cup are paid after the tournament and same for CAF.”