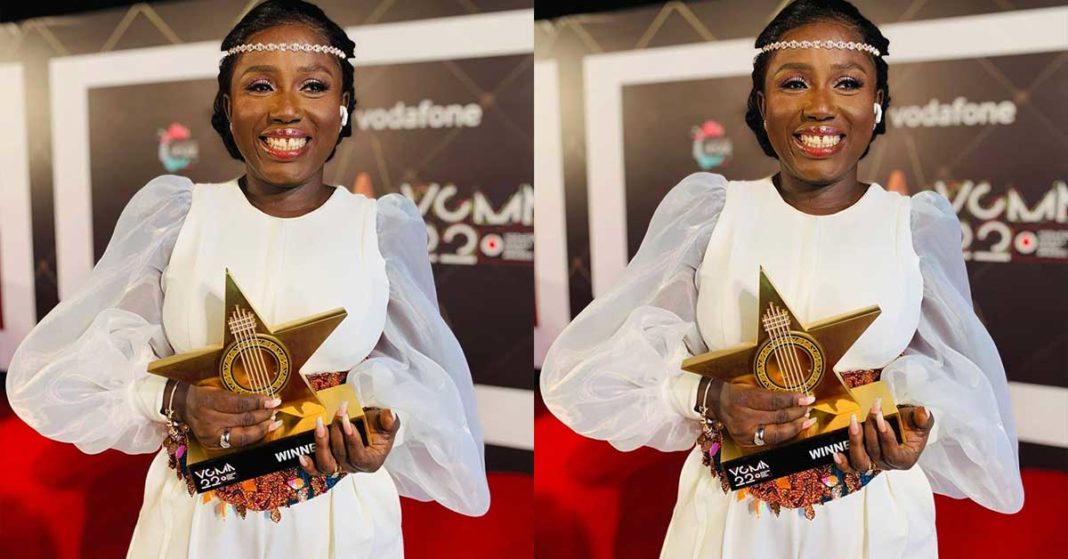 Ghanaian gospel singer, Diana Hamilton has finally justified her 2021 VGMA Artiste of the Year win in a latest interview.

She has finally put to rest the controversies surrounding her VGMA Artiste of the Year win which became trending on social media for some days after the event.

Diana Hamilton who blew airwaves with her ‘Adom’ song on the night of the 22nd Ghana Awards beat competition from KiDi, Medikal, Kuami Eugene, and Sarkodie to win the Artiste of the Year on Ghana’s biggest music night.

After her win, some music pundits and enthusiasts opined that the VGMAs board was biased because the gospel singer did not deserve to win the most coveted award.

Controversial entertainment pundit, Mr. Logic happens to be one of the people who strongly and still disagree with the decisions taken by the VGMA board following Hamilton’s win.

According to him, gospel singer, Diana Hamilton did not win the Artiste Of The Year based on calculated analysis into the music industry and how Ghanaian music is being consumed will tell you there is no way a Ghanaian gospel singer was popular than a secular artiste.

He went on by saying that, the problems following his findings aren’t from the vote but rather from the Academy as well as the Vodafone Ghana Awards Board.

Finally, the ‘Adom’ hitmaker and the reigning 2021 VGMA Artiste of the Year has broken her silence on what people are saying about winning the 2021 Artist of the Year.

When asked how she felt after Mr. Logic chastised her for winning Artiste of the Year, she replied:

“… I just lifted my hands and blessed God, I blessed God…I think when I picked the award I said Jesus is cool like that”

Speaking on the United with Empress Nana Ama Mcbrown, Diana Hamilton noted that she really worked hard for the award.