At least one U.S. citizen among six arrested in assassination of Haitian President Jovenel Moise 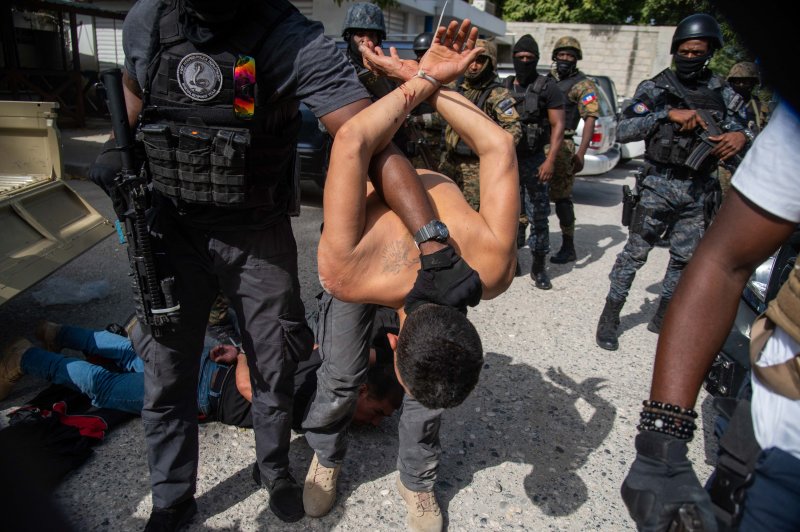 July 8 (UPI) — At least one U.S. citizen is believed to be among six people arrested in connection with the assassination of Haiti’s president, Jovenel Moise, a top government official said Thursday.

Haiti’s minister of elections and interparty relations, Mathias Pierre, said James Solages, a U.S. citizen of Haitian descent, was among the six people arrested in the assassination of the president early Wednesday morning and later told The Washington Post at least one other detainee was believed to be Haitian American.

Authorities did not release the names of the other detainees, but Haitian Communications Minister Pradel Henriquez described them as “foreigners.”

Pierre said the suspects were being held at a police station in the Haitian capital of Port-au-Prince, which had been surrounded by a mob of people outraged by Moise’s killing.

“The special units are trying to protect the police station, because the population is very mad and is trying to get them, to burn them,” Pierre said. “We’re trying to avoid that.”

Seven other suspects were killed in a shootout with security forces in the capital with four dying on the scene and the remaining three dying after being hospitalized, Haiti Chief of Police Leon Charles said.

The assassination of Moise has also led to confusion as to who will lead the country.

However, Joseph has not been confirmed by Haiti’s Parliament, which has not sat since 2020, and Moise had appointed Ariel Henry to replace him shortly before his death.

Henry told a Haitian newspaper that Joseph “is not prime minister, he is part of my government.”

Armed attackers, who officials described as foreign mercenaries, shot and killed Moise in his home in Port-au-Prince shortly after midnight on Wednesday.

Judge Carl Henry Destin said that officials “found 12 holes in the president’s body” resulting from a large-caliber weapon firing 9-millimeter rounds and that Moise’s office and bedroom “were ransacked.”

Moise’s wife, Martine Moise, also sustained gunshot wounds to her arms and thigh along with a severe injury to her hand and abdomen in the attack and was transported to Florida for treatment where her vitals were stable but critical.

Moise’s daughter, Jomarlie, was also present at the time of the attack, but hid in her brother’s bedroom and was unharmed.