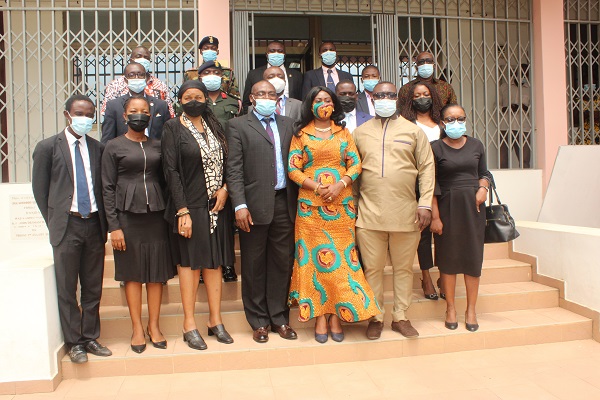 Mr. Jones Borteye Applerh and others in a group photograph

The National Commission on Small Arms (NACSA) in collaboration with the Foundation for Security Development in Africa, has organized a multi-stakeholder forum to ratify the Treaty Prohibiting Nuclear Weapons (TPNW) in Ghana.

The forum brought together relevant institutions and stakeholders to deliberate and develop a roadmap to facilitate the speedy ratification of the Treaty.

The process in the ratification is to seek Cabinet and Parliamentary approval for the Minister of Foreign Affairs to deposit the instrument of ratification at the United Nations for implementation in Ghana.

The implementation of the Treaty is monitored through meetings of States Parties, which will be convened in January 2022 to assess the Treaty’s status and implementation and related decisions.

Ghana is expected to attend the meeting as a State Party but for it to be possible, she must have ratified the treaty and deposited the instrument of ratification by October 15, 2021.

Ghana signed the treaty in New York on September 20, 2017, and was among 122 states that voted in favor of its adoption to break the impasse and to make real progress towards a world free of nuclear weapons.

Mr. Jones Borteye Applerh, Executive Secretary, NACSA, speaking at the opening ceremony of the event, commended all the stakeholders who had played key roles in the negotiation process to the signing of the treaty.

He said the TPNW was developed in response to the long-standing concerns about the disastrous humanitarian consequences of the use of nuclear weapons, stressing “the treaty is to complements other existing disarmament measures”.

As of January 22, 2021, when the Treaty came into force, there were 86 countries that had signed the treaty, including Ghana.

Currently, 54 countries have ratified globally, with eight African states including three from the Economic Community of West African States also having ratified the treaty.

Mr. Applerh said it would create a forum for cooperation and assistance for Ghana to improve its capacity in addressing various humanitarian law implementation challenges.

It will also provide the opportunity to exchange experiences with the major military powers who are at the forefront of humanitarian and peacekeeping, promotion, and support operations.

Mrs. Theodora Williams Anti, Programmes Manager, FOSDA, said the Foundation was a member of the International Coalition to Abolish Nuclear Weapons that advocated for Ghana to ratify the treaty to remained a nuclear-weapon-free country.

She said Ghana was a member of the African Nuclear-Weapon-Free Zone (Pelindaba) Treaty, which was opened for signature on April 12, 1996, in Cairo, Egypt, and entered into force on July 15, 2009.

The Pelindaba Treaty, she said, prohibited the research, development, manufacture, stockpiling, acquisition, testing, possession, control, or stationing of nuclear weapons, as well as the dumping of radioactive wastes.

She said it was important for African countries to join and create awareness about the treaty, stressing that Ghana’s ratification of the treaty would create a norm against the use of nuclear weapons.