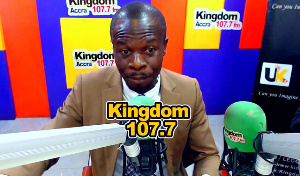 The Bono Regional Chairman for the People Progressive Party (PPP), Sanfa Lucious, has said the clash between the Military and youth of Ejura on Tuesday, June 29, 2021, which ended in casualties shouldn’t have happened in any circumstance, hence security personnel acted unprofessionally and need to be called to order with immediate effect.

“Security personnel is to bring peace but not to kill people in time of demonstration or protest, there are several ways of approaching the youth during the protest,” he said.

This comes after, Clashes between security forces and protesting youth activists were reported in Ejura, Ashanti Region, on June 29, 2021. Police forces reportedly fired on protesters; an unspecified number of participants were being injured.

Protesters gathered to denounce the recent death of a young social media activist who was part of the #FixTheCountry anti-government movement. It remains unclear whether clashes are still ongoing.

Speaking on ‘Pae Mu Ka on Accra-based Kingdom FM’ with Renold Agyemang, he noted that the security agencies are trained and equipped with the appropriate tools; water cannons, tear gas to disperse crowds but not to shoot to kill.

“The manner in which the whole thing happened was wrong at the first place on the part of the security; your duty is to protect the crowd and amend peace among the agitated youth, that is the duty of a security personnel that is why you were trained to do in a time like this. Please and please again what they did was totally unprofessional and needs to be called to order,” he claimed.

He, therefore, called on the president to not sit on the matter but act quickly before things go bad. Adding that all institutions in the country should rise and fight for the betterment of the country.