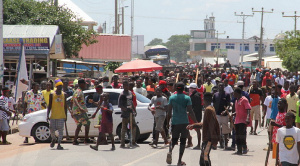 Youth inside Ejura took to the street to demonstrate

Speaking to Bonohene Baffour Awuah on Ghana Kasa on Kasapa 102.5 FM, he said the Municipal Security Council for the area has failed the government, the people, and Ejura adding that in other jurisdictions the Municipal Chief Executive (MCE) should have been called to answer questions.

“In my candid opinion, the Ejura Municipal Security Council didn’t handle the situation well. And I don’t know why they failed because there were a lot of indicators that show the citizens were worried and agitated,” he stated.

According to him, Municipal Security should have known that with such a situation, there was no need for the involvement of security personnel at the early stage rather the traditional rulers and opinion leaders were the best option to lead the engagement with the youth.

The former Police Detective was emphatic that the involvement of the Military in the Ejura clash was unnecessary.

“As soon as the (Opinion Leaders) stand in the public or take the mic to speak to them all nerves are cooled. So these are some of the areas as Municipal Chief Executive you should understand how mediation and arbitration work and take such steps ahead. If it gets beyond the control of the police then you can involve the military because the Police also have crowd control unit that could have done the job,” he disclosed.

Two people on Tuesday were shot dead while six others sustained varying degrees of injuries at Ejura after police opened fire on angry youth protesting the murder of social activist Muhammed Ibrahim popularly known as Kaaka.

This comes after an activist of the #FixTheCountry movement, Ibrahim Mohammed, alias Kaaka was killed by unknown assailants for his advocacy at Ejura Sekyeredumase.

He is said to have had his head clubbed in his home Friday night by the assailants until he became unconscious and was rushed to the Ejura Government Hospital. He was later transferred to the Komfo Anokye Teaching Hospital in Kumasi where he died Monday afternoon.