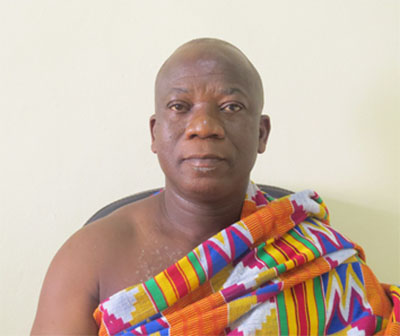 The President of the Eastern Nzema Traditional Council in the Western Region has vented his spleen on some of his sub-chiefs who have purportedly called on the President to retain the District Chief Executive (DCE) for the area, Kwasi Bonzoh.

According to the Paramount Chief, Awulae Amihere Kpainyili III, the sub-chiefs organised a press conference and indicated that the chiefs in Ellembelle District want the President to re-appoint the DCE, without his consent.

The Paramount Chief said he knew that the incumbent DCE and some other activists of the ruling government in the area went for a vetting for the position of DCE.

“As chiefs, we need not to truncate the work of the vetting committee which is yet to come out with a name for the position, by openly supporting one person.

“If the position is given to a new person other than the incumbent, that new person will perceive that those chiefs do not support him.

“What the chiefs did was not a decision by the traditional council and I am sorry to say that they erred,” he added.

Last Friday, some chiefs and queen mothers of Ellembelle organised a press conference and called on the President to re-appoint Mr. Kwasi Bonzoh as the DCE for Ellembelle.

However, the Paramount Chief claimed that such move should have been discussed by the traditional council before going public with it.

Speaking to journalists, the President of the Traditional Council noted that what his sub-chiefs did has indeed worried him.

He said he was not in the area last Friday and he came only to realise that some of his sub-chiefs had gone behind him to declare their support for one of those vetted for the position of DCE for Ellembelle.

He said he had nothing against the incumbent DCE, but since some other persons had also expressed interest and could be nominated, the chiefs in the area should remain neutral.

He then stressed that the traditional council had never called on the President to re-appoint anyone but some individuals who had gone to pursue their own parochial interest.

Awulae Amihere Kpainyili III added that it was the prerogative of the President to nominate someone for the position, and stressed that whoever is mentioned would have the full support of the traditional council.

In a related development, some members of the Communication Team of the NPP in the Ellembelle Constituency have indicated that there was no need for the President to re-nominate Kwasi Bonzoh as DCE.

They alleged that the abysmal performance of the DCE in the area had led to the NPP’s dwindling fortunes in the Ellembelle Constituency.

They claimed that some chiefs who recently organised a press conference to support the DCE’s re-nomination were known NDC members in Ellembelle who have now aligned themselves with DCE Bonzoh for their selfish interests.

The spokesperson for the group, Paul Yenzu, said many of those calling for the re-appointment of the DCE were NDC serial callers who had allegedly been paid to pursue that agenda.

He said apart from projects funded by the Ghana National Gas, Ghana National Petroleum Corporation (GNPC) and other companies operating in the area, the DCE cannot boast of any project he initiated and funded by internally generated revenue of the assembly.

He then appealed to the President to nominate a different person for the position for total unity within NPP in Ellembelle and for the accelerated development of the area.