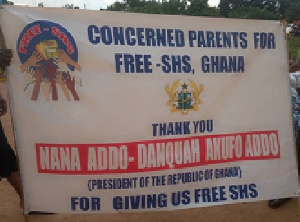 An Education Watchdog, Concerned Parents For Free SHS Ghana, has condemned the comments made by the NDC’s 2020 election running mate, Professor Jane Naana Opoku-Agyemang, and African Education Watch for downgrading the first batch of beneficiaries of the Free Senior High School policy for the “excellent” results they chalked in the 2020 West African Secondary School Certificate Examination (WASSCE).

Expressing their displeasure, the Conveyor for the group, Ben Oteng Marfo, said that those who claimed that the policy was not achievable must be very ashamed now thereby making disparaging remarks against the novel pro poor scheme.

Mr Oteng Marfo noted that “I found the comment very unfortunate from a well-respected Stateswoman. I understand that this comment is coloured with some form of political affiliations, however, I find it displeasing that, the political scope of our country has grown badly to the extent that, sensitive discussions such as the progress of a flagship social intervention programme like Free SHS could be politicized badly to create a dint on the image of the country.”

This comes after the Africa Education Watch stated that investigations they conducted revealed two categories of irregularities that occurred during the 2020 WASSCE; leakage in examiners’ contact details and widespread leakage in examination questions.

The report stated that the think tank intercepted an excel spreadsheet on social media, which contained a total of 1,520 names of WAEC examiners for the WASSCE 2020.

“That leaked list had the specific names, schools, subject areas, telephone numbers and email addresses of certified WAEC examiners. Our checks, unfortunately, confirmed the data; the purported information in circulation on social media, sadly, was an authentic document from WAEC.”

Prof Opoku-Agyemang in an interview with Woezor TV questioned why Ghanaians are celebrating the outstanding performance of the SHS students in the 2020 WASCCE exams.

“We have also heard and seen students who wrote an exams, came out and it was like, you know we had an earthquake in this country, it wasn’t like one school or two schools … this same group performance is supposed to be outstanding that we shouldn’t be talking, it is the group I am referring to,” she said.

She added: “And they went and wrote the exams we heard of the leakage of the exams, we heard of invigilators being compromised, we heard many many things and we also saw the students come out and speak about, ‘no this is not what we were told will happen’, now these students have as and we are happy? It is up to us.”

But Concerned Parents For Free SHS Ghana Conveyor, Mr. Oteng Marfo, was of the view that, “one would expect that, a stateswoman who has served in a very influential capacity in this country such as Vice Chancellor of a prestigious university like the University of Cape Coast (doubling as the first female vice Chancellor of a public university in Ghana) and also serving as Education Minister of the Republic and finally rising to be a Running Mate of a Presidential Candidate in the just ended 2020 General Elections, would not be found sacrificing the image of the country on the altar of political affiliations.”

“No one should see this as an attack on the personality of the Stateswoman because, that is not so, however, it is heartbreaking and distasteful for someone who has been in the hem of affairs of Education in this country to make such comments as if she never encountered the challenges she highlighted as the reasons to which she believes the results were without merits,” the conveyor added.

Meanwhile, The West Africa Examination Council (WAEC) says it is contemplating taking action against the Africa Education Watch including suing them over their recent reports on 2020 West African Senior School Certificate Examination (WASSCE).

In a press briefing Tuesday, the Council debunked the Education Watch’s claims that examination papers were leaked to the public.

The Council stated that it is unfortunate that although WAEC is the report’s subject, the education think tank did not engage the counsel to be better informed about what its processes and procedures are before making their conclusion and recommendation.