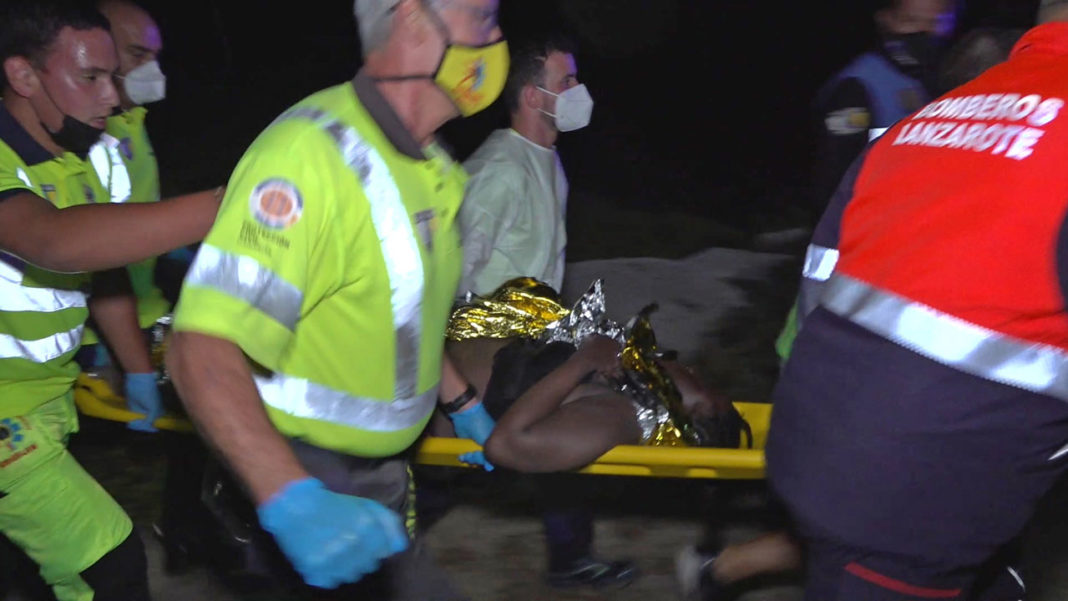 At least three people died, including a woman believed to be pregnant, and another five were missing after a migrant boat overturned off Lanzarote in the Canary Islands, rescuers said Friday.

The vessel was carrying 49 people when it hit a rocky area just off the island’s northern shores, with rescuers pulling 41 people to safety, emergency services said.

“Three people died, among them two women, one of whom we believe was pregnant,” Enrique Espinosa, head of Lanzarote’s emergency services, told AFP.

“We believe there were 49 people on the boat. We found 44 — 41 of whom were alive, and three of whom were dead. We are searching for 5 people, one female minor and 4 males,” he said.

Among the survivors were 20 men, 17 women, two children and two babies, the emergency services said.

The boat overturned close to the shore near Orzola, a village on the northern tip of the island, in a dangerous area to navigate, he said.

“It is a very rocky area and.. if you don’t know it well, you will go straight to the reef.”

The incident happened late on Thursday when there were a lot of people out in the streets who all rushed to help.

“It was at 10:00 pm on a summer evening and a lot of people were in the street. Thanks to that, everyone jumped into the water to try to rescue them,” he said.

Espinosa said the migrants were sub-Saharan Africans who told rescuers they had set off two days ago from the Moroccan town of Tantan, which lies 250 kilometres (160 miles) east of Lanzarote.

Rescue efforts resumed earlier on Friday but were being hampered by rough sea conditions, he said.

Overnight, another two boats carrying 110 migrants managed to reach two other islands in the Canaries, the emergency services said.

Among them were 96 men, eight women and six minors.

Migrant arrivals on the Atlantic archipelago have surged since late 2019 after increased patrols along Europe’s southern coast dramatically reduced crossings to the continent via the Mediterranean.

So far this year, 5,734 migrants have survived the perilous journey to the Spanish archipelago, more than double the number for the same period last year, figures to June 15 show.

At its shortest, the sea crossing to the Atlantic islands from the Moroccan coast is around 100 kilometres (60 miles), but it is a notoriously dangerous route because of strong currents. Vessels are also typically overcrowded and in poor condition.

Last year, 1,851 people died on the route, according to the Caminando Fronteras organisation which monitors migrant flows.