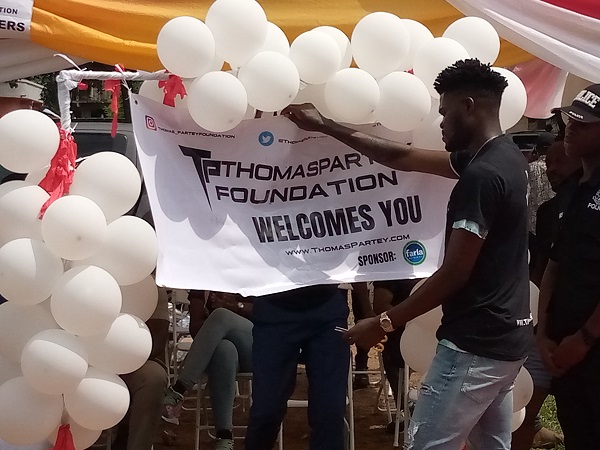 Ace Black Stars midfielder and Arsenal Star, Thomas Partey has launched a foundation aimed at supporting aspiring but deprived up and coming footballers to reach the pinnacle of world football.

The former Krobo Youth FC player, before some chiefs, Imams, members of his foundation and other invited guests, unveiled the ‘Thomas Partey Foundation’ at a short ceremony at the Bethel Preparatory School at Odumase-Krobo.

Launching the Foundation, the former Athletico Madrid marksman said his foundation will offer opportunities for all young and aspiring football talents to enable them reach their dreams.

“This foundation is aimed at assisting the young ones full of football talent to reach the very top of football and offer them the chance that they merit which most of us were deprived of, to enable them do better than me because it is hard to get to where I am without help,” said Thomas Partey.

He advised young Krobos not to relent in their dreams as the much needed help to succeed in their chosen endeavours could be within reach.

The Black Stars deputy captain who described the gesture as his way of giving back to society called on all and sundry who are desirous of supporting the foundation to come forward and do so.

“All I want to tell Krobos is that all those with dreams should keep them alive because you have no idea where help will come from so continue working and your support will surely come…the idea is that we want to support all those who are working hard so we are welcoming all those who want to contribute their widows mite to the vision of this foundation.”

Ex-Black Stars captain and Thomas Partey’s advisor, Joe Addo lauded the player’s hard work and his resolve to return to his roots to offer a helping hand to those who want to follow in his footprints.

“This young man is our brother, our son and he’s gone great lengths to give back whatever he’s made in his professional career…this guy knows where he comes from, he knows the people, the support he has from here and he’s willing to give back to this community,” he said.

According Joe Addo, the foundation will, in fulfillment of the player’s aspirations for the academy, nurture the country’s future stars.

“As much as possible, we’ll make sure every talent that is in this community, be it football, music, any talent, he’s willing to help enhance the talent, so this foundation will start with sports and try to help the young ones especially from ten, twelve, thirteen, that is where you get the real talents.”

Asafoatse of Menekpo, Nene Teye Adjiso III who represented the President of the Eastern Regional House of Chiefs and Konor of the Manya Krobo Traditional Area, Nene Sakite II congratulated Thomas Partey on his successful exploits and encouraged him to fulfill his plans for the foundation.

The player will also establish an academy in the community soon.