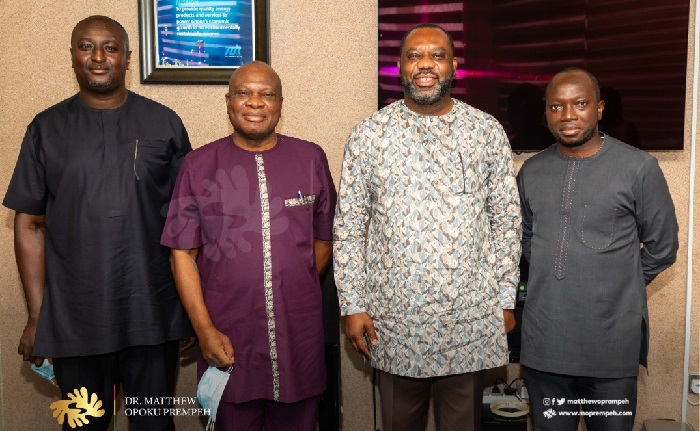 Members of the IMC of TOR with the Energy Minister, Hon. Mathew Opoku Prempeh

The bailout is expected to help TOR settle some of its outstanding debts and tax liabilities as well as replace some mal-functioning equipment to make the company function fully.

Speaking on the bailout, board chairman of TOR, Tongraan Kugbilsong Nanlebegtang, in a media interview, said he believed that the bailout would effectively resuscitate the refinery to operate at optimum capacity.

According to him, part of the money, when approved, would be used to replace worn-out equipment, upgrade the safety systems, improve on the storage tanker, replace weaker pumps and motors and install new automatic metres, among others.

This follows the formation of a new three-member Interim Management Committee (IMC) by government to take over the management of the refinery after two of its directors, Francis Boateng and Herbert Ato Morrison, Managing Director and Deputy Managing Director respectively, were relieved of their posts recently.

The new IMC will be led by Nobert Cormla-Djamposu Anku, with William Ntim Boadu and Okyere Baffuor Sarpong as members.

Interestingly, the refinery, which purportedly received government support of an amount of $4.2 million to revamp its operations, is currently saddled with a GH¢167 million debt.

TOR is a strategic national asset which was established in 1963 to provide refined petroleum products to the local and regional markets to aid economic growth.

The company has over the years transformed itself from being a sole supplier of refined petroleum products into a player in the deregulated and highly concentrated downstream petroleum sector.

In spite of all the challenges, the refinery has been able to replace its furnace, received a supply of one million barrels of crude oil by BP Oil to process, and also entered into an 11-million-barrel processing contract with Vitol-backed Woodfields Energy Resources.