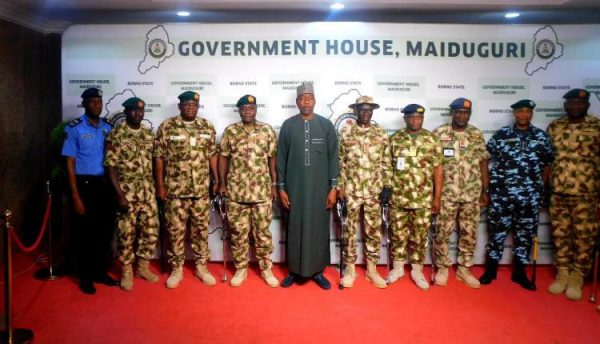 In preparation for the official Presidential visit to Borno state, scheduled for  today, Thursday, 17th of June, 2021, the Borno State Governor Professor Babagana Umara Zulum has received all service chiefs at the government house Maiduguri.

The service chiefs were led by the chief of Defence Staff, General Lucky Irabor and the IGP of police, Usman Alkali.

The state governor, Babagana Zulum, stated this in a special broadcast to the people of the state on Wednesday.

Mr Zulum said the president would appraise the security situation and inaugurate some of the viable projects executed by the federal and state governments during the visit.

“I once again, thank you for supporting our administration. I remain grateful to everyone, for your support, well wishes, prayers and above all, for being good citizens.

“Insha’Allah; our President, Muhammadu Buhari, will be coming to Borno State on Thursday, June 17, 2021.

“The president is coming to appraise the security situation in the northeast during which he will commission some developmental projects executed by the state government.

“The president will also commission the first phase of 10,000 houses which he generously approved and funded, for the resettlement of IDPs and refugees,” he said.

Mr Zulum disclosed that construction work of over 4,000 of the 10,000 houses were completed at Kakeri, Dalori and other communities across the state.

The governor noted that the president “had demonstrated greater commitment to the security situation, and displayed deep compassion and love for the state.”

Mahama disagrees with Jean Mensa over credibility of election 2020