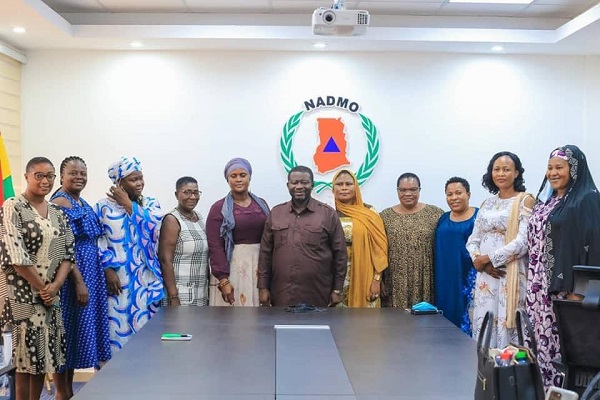 An appeal has gone to the executives and grass-root members of the New Patriotic Party (NPP) to exercise the greatest restraint on who leads the party in 2024 presidential election.

The Director-General of the National Disaster Management Organisation (NADMO), Mr. Eric Nana Agyemang Prempeh, who made the call, said, it was too early for leaders of the party at all levels and other members to put their energies and time on who leads the party at a time President Nana Addo Dankwa Akufo-Addo has not even finished with his appointments.

Speaking when the regional women organisers of the party called on him in his office in Accra, he said, “who leads the party should not occupy our attention at this time”.

The women called on the NADMO boss to thank him for the many good things he was doing to advance the cause of the women’s wing of the NPP in the regions and the party in general, and further discussed matters relating to the progress of the party going forward.

Mr. Agyemang-Prempeh said it was regrettable that some people would be thinking about who becomes the party’s residential candidate when the party just came out victorious in the 2020 elections.

“We’ve just won an election and the President is in the process of forming his government, so why the rush? He queried.”

The NADMO Director-General who is a senior member of the NPP, said the Akufo-Addo administration has so far performed to the admiration of all.

Therefore, it was incumbent on the rank and file of the party to support the President to successfully execute his mandate for the second term so that the talk of breaking the eight-year election victory cycle would become a reality.

“Breaking the 8 agenda shouldn’t transform to breaking the party. Let us support President Akufo-Addo to succeed and all other things will follow.” he advised the party members.

Taking a look into history, the NADMO Director-General said the Danquah-Dombo-Busia tradition has the best chance of retaining power for long period but internal developments let it down.

“Dr. Busia’s government performed so well in a short period but was overthrown in military coup so we can forgive that. But after, President Kufuor executed his mandate with distinction in eight years, we allowed internal developments to take a better part of us leading to our loss in the 2008 elections.” he said.

“We must, therefore, this time, guard against any acts that can undo our quest to win a third straight election victory.” he added.

Mr. Agyeman-Prempeh said a strong and peaceful NPP was a blessing to Ghana because the nation’s hopes were stuck deep in the NPP.

“The tremendous delivery of President Akufo-Addo has been made possible partly as a result of the peace and stability within the party. He has brought the party together as a strong unit and we cannot disappoint him when he is bent on doing more for the nation to build on the image of the NPP.” he said.

Speaking on behalf of the Women Organisers, the Savanna Regional Women’s organiser, Hajia Safia Mohammed commended Mr. Eric Agyemang-Prempeh for receiving them, saying that it was a testament to his commitment to the course of the party.

She asked other leading members to emulate his example.

She pledged that the Women Organisers would work hard to support the President to execute another successful four-year mandate.

They further appealed to Eric Nana Agyemang-Prempeh to consider replacing Sir John as they both have always had the grassroots at heart .

Also present at the meeting was Hajia Sawudatu, Deputy National Women Organizer who is also a Deputy Director General.