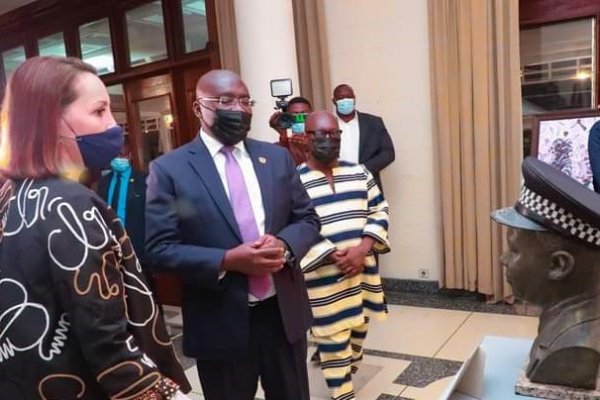 ghanammahttps://www.ghanamma.com
- Advertisement -
Accra, June 16, GNA – A 194-page book, providing insight into more than 70 pieces of art work and painting received by former President John Agyekum Kufuor during his tenure as President, has been unveiled by Vice President Dr Mahamudu Bawumia in Accra.
The Book, titled: “Art and the Power of Goodness: A Collection of John Agyekum Kufuor” was authored by Mr Ivor Agyeman-Duah, an astute academic, writer and film director, who is also the Executive Director of the Ghana Museums and Monuments Board.
The Foreword of the Book was written by Former Prime Minister of the United Kingdom, Mr Gordon Brown. It has 10 chapters and contained descriptive essays chronicling Mr Kufuor’s taste for art work, cultural values and family background, which epitomised his personality, leadership qualities and connections across the world. Published by Digibooks Ghana Limited, the Book also encapsulates diversities of Ghanaian and African culture, Ghana’s diplomacy, and history of African slave trade, as well as the various stools and emblems of Ghanaian traditions. It was launched at the residence of the French Ambassador, Madam Anne Sophie-AVE, in Accra on Tuesday.
Vice President Bawumia lauded Mr Kufuor for his exemplary leadership during his tenure as President, from 2001 to 2008, which saw the stabilisation of the macro-economy and innovative policies that transformed lives.
He cited the bold step, which took Ghana to the Highly Indebted Poor Countries (HIPC) initiative, leading to the cancellation of the country’s debts and implementation of programmes and policies with funds received.
He mentioned Mr Kufuor’s legacies to include the National Health Insurance Scheme, Private Sector Initiative, construction of flyovers and many other social protection interventions that lessened the plight of the poor.
Vice President Bawumia donated GHc50,000 towards purchasing some copies of the book to be distributed to schools to enhance students’ knowledge and understanding of the country’s art and culture.
Mr Agyeman-Duah, the Author of the Book, and former Advisor to President Kufuor on International Development Cooperation, described him as a “Power Strategist” who never wavered in pursuing his ambitions in life.
Madam Sophie-AVE, in her welcome remarks, lauded the former President for his leadership qualities that changed many lives and enhanced Ghana’s diplomatic relations with France and other countries.
She said the French Embassy was sponsoring some projects in Ghana to promote the country’s cultural heritage.
- Advertisement -
Share
Facebook
Twitter
Pinterest
WhatsApp
Previous articleLocal Government Service Workers Union commends government
Next articleEU launches second DDF call for proposals on border management
- Advertisement -

Fuel prices to go up by 20 pesewas – IES predicts