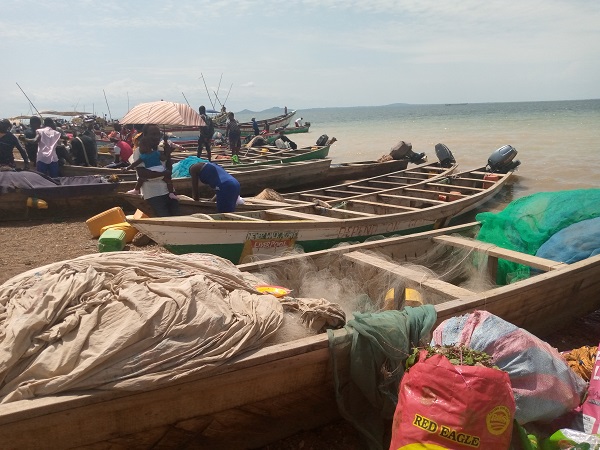 Some 200 boat owners and fisher folks at Akateng in the Eastern Region are up in arms against a premix fuel cartel which they accused of sabotaging their work by taking over fuel meant for their fishing and transportation activities.

The boat owners who load goods like charcoal, fish, yam, cattle among others from Afram-Plains North and South to Akateng claim that the premix fuel cartel is hijacking fuel supply to them and then turn around to sell it to them at exorbitant prices.

Torgbui Abusuano, Vice-chairman of the Akateng Boat Owners Association, the main consumers of the premix fuel, who work on River Afram, told GhanaWeb that most of the culprits are not fishermen and hence should not have access to the fuel in the first place.

He revealed that the cartel takes advantage of the scanty supply of the commodity to the operators and sell the hoarded fuel to them at exorbitant prices.

“Our major concern here is the pre-mix fuel. The fuel comes alright but the problem is that people who are not fishermen hijack the pre-mix fuel and hoard it in their rooms before we get it to buy because we are from the other side of the lake. The fuel tanker arrives before we come and this is a problem for us,” said the agitated boat operator.

“They, in turn, sell it to us at exorbitant prices,” he added.

Torgbui Abusuano argued that though the fuel supplied by the tankers can suffice for use by the fisher folks, the illegal practices of the cartel, influenced by the premix fuel committee established to oversee the supply of the fuel means very little is left for them, forcing them to turn to the cartel for supply which they are forced to buy at GH¢120 instead of GH¢55 from the fuel tankers.

“What we’ve realized is that each of the eight members of the pre-mix fuel committee siphon out one drum from each of the tankers that arrive, how much would be left for us, nothing.”

“If the fuel was bought only by the fishermen and not others, there would even be enough fuel left in the tanker. In the end, they hoard that fuel and you are forced to buy from them because you need it.”

Adding: “It’s supposed to be sold at GH¢55 but they sell it to us at GH¢120 per seven gallons. Even if you buy it at this exorbitant price, you’re unable to increase your fare because it’s not sanctioned by government,” said the Vice-Chairman.

The situation, the boat owners say, has worsened due to the reduced quantity of the premix fuel supplied, from 13 tankers a week to the current four.

The only solution, the boat owners say is an increase in the quantity of fuel supplied to them.

“I’m calling on government to increase the four tankers per district allocation to the 13 tankers we were previously receiving…If we get a regular supply of the fuel and nobody buys from the cartel, they would be forced out of business.”

Others also called for the dissolution of all the premix fuel committees whom they accuse of masterminding the works of the cartels. According to him, fisher folks were compelled to go on their fishing expeditions with scanty fuel, leaving them at the peril of the associated risks.

“Due to this problem, we are forced to go fishing with only the little we get and if you encounter a storm while fishing, it could result in an accident. If we buy the petrol from Asesewa too, the police arrest us and ask why we are transporting petrol in vehicles,” he said.

“Government should increase the pre-mix supplied to this place so everybody can access it to do their work so that the cartel can be thrown out of business.”

Chairman of the Akateng Premix Fuel Committee, Daniel Akwetey Bor when contacted by GhanaWeb admitted that there was such a cartel operating in Akateng as well as other fishing communities in the district.

Though he condemned the activities of some members of the group as being detrimental to the operations of the fisher folks and the boat owners, he nevertheless said their work was critical to boat owners since they (cartel) travel to other communities to buy the fuel to supply to the boat owners at Akateng and are therefore entitled to an increment to cover their cost.

He also denied that members of the premix fuel committee were also caught in the dealings, adding that their sole responsibility is to facilitate development in their respective communities through proceeds made from the sale of the premix fuel.