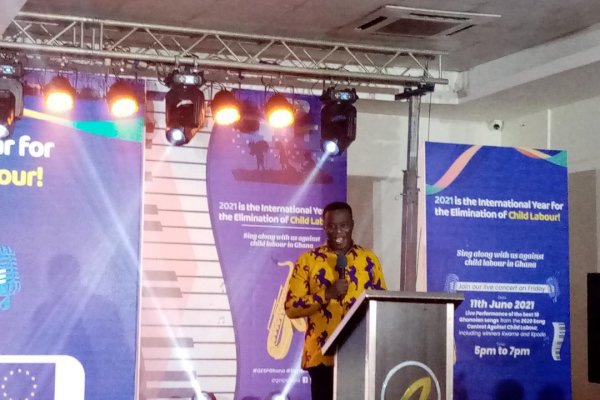 The event was part of a series of other activities geared towards combating Child Labour in the country as the year 2021 was designated as the International Year for the Elimination of Child Labour with June 12 as the World Day Against Child Labour.

Mrs Diana Acconcia, Ambassador of the European Union to Ghana speaking at the event said promoting decent work and ending child labour worldwide was a top priority for the Union and in promoting the EU’s fundamental values, the European Commission was supporting the fight against child labour for years in Ghana.

She added that Ghana progressed in the fight against child labour through successive programmes and strategies such as the National Plan of Action Against Child Labour and the complexity of the problem and its root causes required a holistic and more sustainable approach.

Mrs Acconcia said the Union was exploring various sources to increase the effectiveness and ensure sustainable input to stopping child labour and stated that it was only working together in the fight against the menace that they could succeed in eliminating it by 2025.

The EU Ambassador therefore called on other organisations both national and international to join the fight towards eliminating child labour in Ghana and around the world.

Mr Ignatius Baffour Awuah, Minister of Employment and Labour Relations, said the fight against child labour was not only the government or EU’s problem and that it was also the responsibility of every individual and government was giving various opportunities to schools through the introduction of free SHS and other educational curricula aimed at combating the menace.

He however stated that the days people thought children in school were not engaging in child labour were gone as it was revealed that such children still went through it, and his ministry had set up a master steering committee that was responsible for coordinating and coming out with policies concerning child labour.

The Minister said through that, they had signed agreements with various stakeholders including; many government institutions as to their respective roles to play to eradicate the problem, with support from their development partners to eliminate it.

Mr Awuah reminded all the organisations that signed on the pact to fight child labour to remain committed to their pledge as it was no longer social issues, but assuming International dimensions, adding, “If we are not careful, it will affect our daily ways of life.”

He assured Ghanaians that his outfit was committed to fighting to eliminate child labour.

Mrs Anne-Claire Dufay, Country Representative of the United Nations International Children’s Emergency Fund (UNICEF), Ghana, said a survey by the organisation revealed that about 2.5 million of Ghanaian children were engaged in child labour with about 1.2 million in abusive and exploitative works.

She added that the COVID-19 pandemic had increased the total number of child labour in the country by 10 per cent and government should invest in holistic and transformative solutions that support children’s rights to cultural identity, health, protection and education.

She said only seven in 10 children were protected by the legal status and that government should waive the various late birth registration fees to make it easier for families to obtain birth certificates.

Mrs Akua Ofori-Asumadu, Representative of the International Labour Organization (ILO), said there were more children in child labour in Sub-Saharan Africa than in the rest of the world adding that the latest estimate indicated that 92 million children comprising 40 million girls and 52 million boys were in child labour in Africa at the beginning of 2021.

Mrs Asumadu said it meant one out of every five children were in child labour adding that it was not a good sign for the continent’s development.

She said the percentage of children in child labour in Africa had increased from 19.6 to 21.6 million with the absolute number children in this activities increasing by over 20 million over a four-year period, jumping from 72 million to 92 million.
GNA