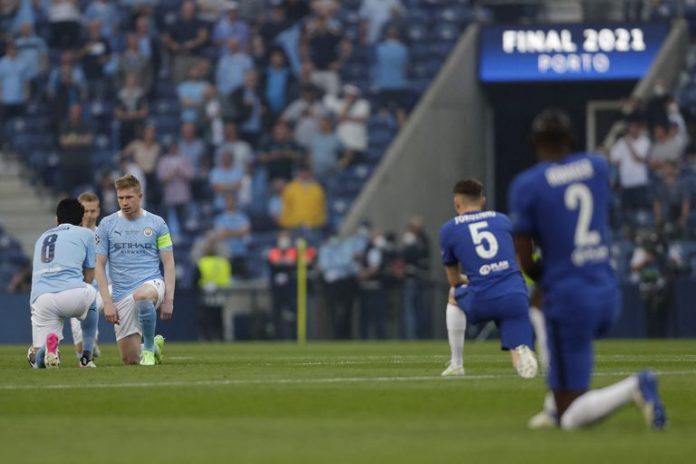 Former Manchester United defender, Timothy Fosu-Mensah, has said that players taking a knee before matches are not achieving the desired impact.

There has been a lot of debate as to whether it is still important for players to take the knee before games. Former French international, Thierry Henry has shared that people are now “forgetting” why players started taking the knee in the first place.

Timothy Fosu-Mensah described the symbol of solidarity against racism in football as having made a lot of impact in the beginning but the story is different now.

Although the Bayer Leverkusen defender has never suffered any form of racism, he has seen many racist acts.

The player however believes players have the right to walk off the field if they suffer racist chants and slang from supporters and any other person on the field of play.

“I think players can walk off the field if they suffer any racist actions. Players deal with such things differently. One person may be affected by these racist chants but not all people.”

The Bayer Leverkusen player believes racism has no part in the game loved by many globally.

The act of kneeling — made famous in 2016 by NFL quarterback Colin Kaepernick, who kneeled in protest of the national anthem — was taken up by English Premier League footballers during the 2019/2020 season as an act of solidarity following the global outrage over the murder of George Floyd.

Last season, English top-flight players continued to kneel head of games, though Crystal Palace star Wilfried Zaha became the first Premier League player not to do so before kickoff, instead choosing to stand before his side’s match against West Brom. Zaha said it was “becoming something we just do.”

In March, former Arsenal and Barcelona star Thierry Henry told CNN Sport that the discourse over the issue has veered so far off course that people are now “forgetting” why players started kneeling in the first place.

“The cause is: what are you going to do for it to be better for everybody? Equality. Everybody, and obviously I’m going to talk about my community,” Henry told CNN’s, Darren Lewis.

“This is not so much about kneeling or standing — which, by the way, I thought kneeling was a strong, strong message and we all know where it comes from — but then the discussion moved to: are we standing or are we kneeling?”.

We are facing hardship, have mercy on Ghanaians