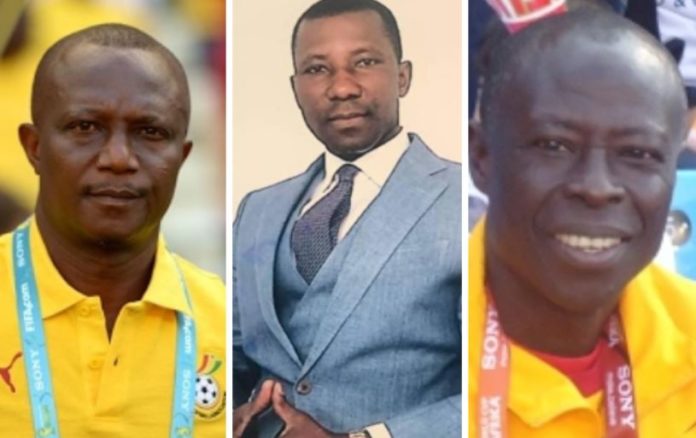 Kenpong Group of Companies have teamed up with former Black Stars coach and captain, James Akwesi Appiah and former GFA Technical Director, Francis Akwesi Appiah to set up a modern football academy, according to reports.

Reports suggest that the newly established academy situated at Gomoa Pomadze in the Central Region would focus on naturing young talents in the country.

Insiders reveal the three astute personalities have vowed to make the academy the biggest in Ghana and West Africa, hence the decision to invest heavily in the project.

Whiles Akwesi Appiah and Oti Akenteng deal with the technical aspect of the game, Kennedy Agyapong who is widely known as (Cappuccino or Kenpong) would provide the necessary logistics to ensure the young kids get the best of training and support.

However, some media practitioners who are familiar with the project have praised the respected businessman for his decision to invest in football and pledged to throw their weight behind him.

“Cappuccino has been a friend of the media for more than 20 years, so this is time for us to show him support. We are going to do everything possible to ensure he succeeds,” one of the journalists who want to remain anonymous added.

About the two coaches

James Akwesi Appiah was Ghana’s assistant coach between 2007 and 2012. Appiah was coach of Ghana U23 as they won the 2011 All-Africa Games.

He was appointed as the Head coach of the Ghanaian national team in April 2012, describing himself as “the underdog” in the process.

Akwesi Appiah qualified Ghana to the 2014 World Cup in Brazil, making him the first black African coach to take the country to the World Cup.

He was a left-back, played club football with Asante Kotoko, playing for them between 1983 and 1993 and played for the Ghanaian national team between 1987 and 1992, appearing in two FIFA World Cup qualifying matches; he also captained the Black Stars and Kotoko in the late 1980s.

Francis Oti Akenteng is a former Ghanaian Olympic athlete and coach. He is the immediate past Technical Director of the Ghana Football Association

Oti Akenteng was appointed Technical Director of the GFA in 2009 and served as CAF Technical Education Officer for fourteen years. He previously coaches Accra Hearts of Oak and AshGold. Kofi Kinaata And Lawyer Ntim “Fight” For The Love Of MzVee » ™

Relocating Ameri is unnecessary and wasteful – Energy and Associates Ghana

Buhari Inaugurates Committee To Lift 100 Million Nigerians Out Of Poverty