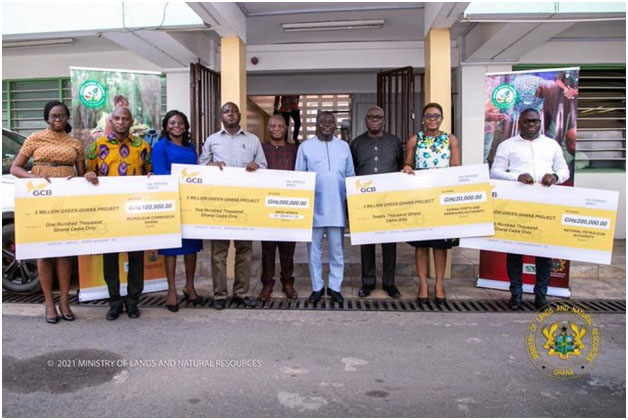 SOME FOUR corporate organisations on Tuesday presented dummy cheques totaling GH¢520,000 to the Ministry of Lands and Natural Resources towards the Green Ghana Project.

The gesture was to secure more seedlings for planting across the country.

Officials who represented these companies said their outfits were touched by President Nana Addo Dankwa Akufo-Addo’s vision of restoring most of Ghana’s forest cover which has been destroyed by illegal miners and preserving the ecosystem to halt the negative effects of climate change.

The Green Ghana Project is intended to plant five million trees on Friday, June 11, 2021, across the country and President Akufo-Addo will commemoratively plant a tree on the day.

Benito Owusu-Bio, a Deputy Minister-designate for the Ministry of Lands and Natural Resources, who is also Chairman of the Planning Committee of Green Ghana Project, received the cheques on behalf of the ministry.

He appealed to faith-based organisations, corporate entities, schools and all well-meaning Ghanaians, to join forces towards planting five million trees a day, while he also urged all persons and corporate bodies who would like to participate in the nationwide exercise to go to the district offices of the Forestry Commission and Metropolitan, Municipal and District Assemblies for seedlings.

He added that the five million trees targeted this year would be increased to 10 million trees next year since the programme would be an annual event.

The Deputy Minister also expressed appreciation to the Presbyterian Church Ghana, the Anglican Church, the Methodist Church, the Pentecostal and Charismatic Churches and the Muslim Community, as well as the media for the enthusiasm they have exhibited towards the tree planting exercise.

Additionally, he said the Forestry Commission would take care of the young trees in the forest reserves, while the 45,000 brigade corps under the Youth in Afforestation would cater for the trees in the urban areas.

Watch: Uzo Aduba says she was satisfied with Crazy Eyes’ ending on ‘WWHL’