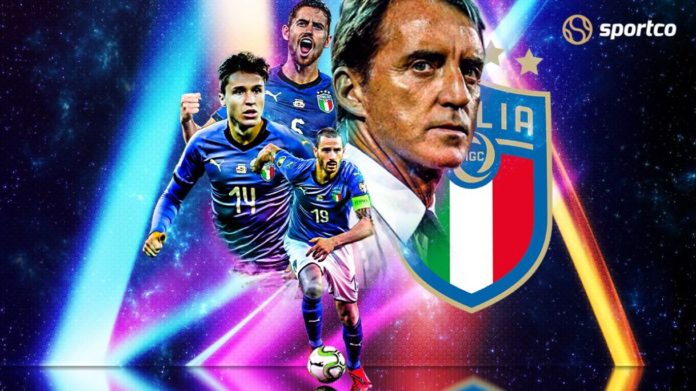 Italy will be strong favourites to top Group A

The small matter of the opening game of UEFA EURO 2020. This is sure to be a tournament opener with an extra special feel. Italy are unbeaten in 27 fixtures and will have the added boost of home advantage at the Olimpico in Rome, with Turkey looking to avoid defeat in their first match of a EURO at the fifth time of asking.

Former Manchester City manager Roberto Mancini has been leading a strong revival of Italy’s fortunes since taking charge of the national team in 2018, meaning they enter Euro 2020 amid a feeling of cautious optimism.

Following a period of sustained success, which included winning the 2006 World Cup and reaching two out of four European Championship finals, failure to qualify for the last World Cup signalled the end for that generation of household names.

Mancini begun a new era for Italy with a largely young or inexperienced squad assisted by a small core of the remaining old guard, using a total of 70 different players in his three years in charge as he experimented in search of the right balance of new and old for the next generation.

That persistence now seems to be paying off, as they enter Euro 2020 on a run of 27 matches without defeat, meaning that if they go unbeaten in the group stage they will equal a national record that has stood for eight decades.

That run includes a perfect qualifying campaign in which they won all 10 games, and the Azzurri go into the Euros off the back of eight victories in a row, having scored 11 goals without reply in their two warm-up friendlies.

That form under Mancini, combined with the fact all three of their group fixtures will be played on home soil in Rome, means Italy enter the Euros full of confidence, even if expectations are lowered by their lack of experience, with only three members of their squad having started more than one match at an international tournament before.

Italy will be strong favourites to top Group A but will need to be wary against some of the most unpredictable teams in the tournament, including the surprise package of the last European Championship, Wales, who have added several promising young players like Chelsea’s Ethan Ampadu to the core of the team which reached the semi-finals in 2016.

However, it is Turkey who may be of most concern to Italy, with an established team who have been playing together for a number of years and hit high-scoring form.

They matched France every step of the way during qualifying, with a home win and a draw in Paris against Les Bleus, and continued to impress recently with friendly draws against Germany and Croatia, plus an emphatic 4-2 victory over the Netherlands in the World Cup qualifying in March.

The other team in Group A are also difficult to judge. Switzerland impressed in qualifying and reached the Nations League semi-finals in 2019, but following the suspension of football due to the Covid-19 pandemic, failed to win any of their seven matches in 2020.

They lost four of those, although the three draws were in competitive action against strong opposition, in the form of Germany (twice) and Spain, and they have since won all five games in 2021 going into the tournament.

Jorginho and Emerson are two of three Brazilian-born players in the Italy squad, along with Atalanta defender Rafael Toloi, continuing a tradition of naturalised South Americans – known locally as Oriundi – which dates back to the country’s World Cup wins in the 1930s.

Jorginho looks likely to be a starter for Italy, having been a regular in a consistent midfield alongside Nicolo Barella throughout their qualifying campaign – during which he scored the decisive goal against Greece which booked their place in the tournament – especially given the fitness concerns surrounding Paris Saint-Germain man Marco Verratti.

Despite Mancini repeatedly showing his faith in Emerson during his time as Italy manager, the left-back’s position in the starting line-up is less certain, although he just about seems to have the edge in the face of strong competition from Roma’s Leonardo Spinazzola.

Aside from featuring primarily as an online bookmaker, BetWay Ghana has also through many ways impacted Ghanaians through various CSR projects.

From donations made to communities and organisations through the BetWay Care initiative to the many fora and seminars organised to Foster the impartation of knowledge, the online bookmakers have warmed themselves into the hearts of many Ghanaians over these years.

It is for this reason that we take time to wish them well as they mark their 5th anniversary.

As part of our efforts to introduce our readers to the BetWay platform, we encourage you to have a read via this link https://www.betway.com.gh/blog/ to learn more about their CSR projects and their latest promotions running on the platform.

Subsequently, we shall take time to also furnish readers with details about the respective BetWay initiatives rolled out during this European Football Season.