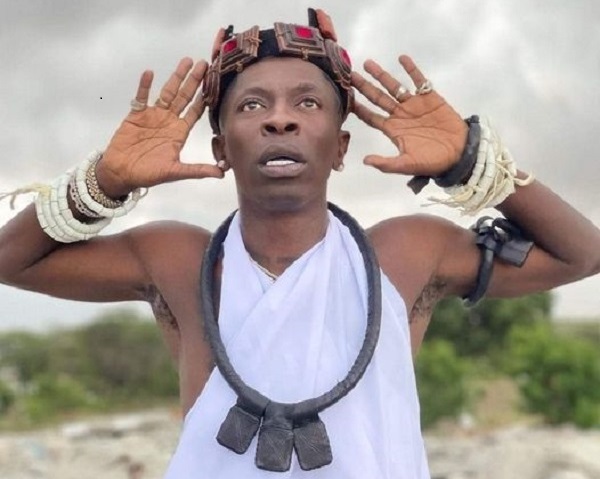 • There diverse reactions to the photo

• It is believed to be a visual from his upcoming album

Controversial, non-conformist and a newsmaker, which other adjective will you throw on Shatta Wale? He fits them all depending on the lens through which you are viewing him.

His fans say he is a revolutionary who changed the face of Ghana music and made event organizers pay artiste exactly what they deserve.

His critics say otherwise. A two-faced manipulator who craves attention and will do everything to get the media’s attention is who they see him to be.

But one thing that remains undisputed about Shatta Wale is that he is a newsmaker. Every move he makes or words he spits becomes a talking a point and its little wonder that social media users, bloggers and mainstream media houses drool over his social media pages for content.

So, what’s the latest thing about the man Shatta Wale that has sent tongues wagging on social media? A picture of him in traditional priesthood costume with white cloak some objects hanging around his neck has been making the round on social media the past forty-eight hours.

Looking up to the skies like the Biblical Moses praying for to send down manna, Shatta, in this photo depicts a character of a priest who is possibly praying or expecting something to fall from the Heaven.

Is Shatta Wale a fetish priest now? this is the question most social media users are asking.

There are those who see a beautiful picture which signifies the direction of his upcoming GOG album as one with indigenous Ghanaian elements.

There are also the critics who would not pass on a chance to throw in the ‘gbee nabu’ tag to troll him.

Read some of the reactions below After dropping out of school for impregnating her, she says the baby is not his – Boy cries

Komenda SHS girl given 40 lashes for leaving school without exeat