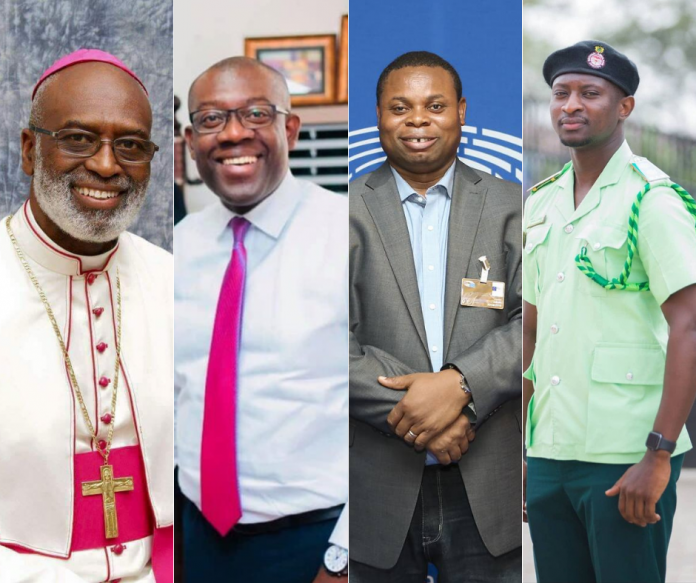 Our school of the week on our prestigious old students series is Pope John Senior High School and Minor Seminary.

It was built in 1958 by the late Bishop Oliver Bowers at Effiduase, Koforidua, in the Eastern Region of Ghana.

The school was initially intended to be a Catholic seminary to train young boys to become priests but it was later changed to accommodate the general public. (Fun Fact: Pope John Old has the highest number of priest in the Catholic Church)

School colours are Yellow and Blue with a boat as its mascot which is in tangent with the school’s Motto; Vela Damus which means “We Set Sail”

The students of the school are referred to as Pojomma while the alumni are addressed as Pojoba to which they respond Daasebre.

Pojoss is the 2001 Winner of the National Science and Maths Quiz and has won the National Independence Debate Championship on 3 occasions.

There exist friendly alliances with several female institutions including Krobo Girls and St Roses with a healthy rivalry in sports, education etc between Pojoss and St. Peter’s.

Archbishop Palmer-Buckle is a Ghanaian Archbishop of the Roman Catholic Church, a former teacher and a key figure in the political scene in Ghana.

He worked in his alma mater Pope John Senior High School and Minor Seminary and at Achimota School as a chaplain and teacher.

Member of parliament for the Ofoase-Ayirebi constituency and Minister of Information, Kojo Oppong Nkrumah is alumni of POJOSS.

Kojo Oppong was an Assistant School Prefect during his time and represented the school in the National Debate Championship in 2001 which they won.

He was former host of the Super Morning Show on Joy Fm and is also a lawyer.

In 2016, he become a practicing lawyer at Kulendi, Attafuah and Amponsah at law in Accra.

The World Economic Forum named him as one of its 2020 Young Global Leaders.

Major General J.B Danquah is a former Chief of Defense Staff (CDS) of the Ghana Armed Forces and a Member of the Council of State.

Danquah was the commanding officer of the Second Ghana Battalion of the ECOWAS Ceasefire Monitoring Group (ECOMOG) based in Liberia between October 1990 to June 1991.

He also the role as chief staff officer at Army Headquarter before being promoted to CDS in 2005 as a Major General.

He was the Deputy Division Chief and Mission Chief. He has Ph.D. in economics from the University of Nottingham

Kobby is the managing director of the Bank of Africa and has over 20 years of experience in the finance and banking industry.

He has Ghanaian and international experience having worked for KPMG, Securities Discount Company Ltd, The Trust Bank in Ghana and for Belgolaise Banque in London and Brussels, Sterling Bank Plc, Nigeria and Bank of Africa Tanzania Ltd.

Kobby is a Chartered Accountant and has an MBA in Finance and Banking from the University of Wales, Bangor and the Manchester Business School.

Ibrahim Mahama is a Ghanaian author and renowned artist of monumental installations.

He is the founder of the Savannah Center for Contemporary Art (SCCA) in Tamale.

Professor Ellis is a former Vice Chancellor of the Kwame Nkrumah University of Science and Technology and has a Doctor of Philosophy in Food Science.

He was awarded with the Outstanding Achievement in Academia from Pope John Senior High School and Junior Seminary in 2012.

Dr Edward Omane-Bomah is a Health Policy Planning and Financing Expert, a Medical Practitioner and the Minister for Communications and Spokesperson to the President of the Republic of Ghan during the John Mahama Administration.

He also served as Deputy Minister for Youth and Sport in the administration of President John Evans Attah-Mills from 2012 to 2013.

Franklin Cudjoe is the Founding President and chief executive officer (CEO) of Think Tank IMANI Centre for Policy and Education. He is a Ghanaian author and social-political commentator.

The Member of Parliament for Lower Manya Krobo, Ebenezer Okletey Terlabi attended Pojss from 1983-85. He is a former Eastern Region Minister and Deputy Minister for Defence.

The MP for Dormaa East was an Assistant Bowers House Prefect during his time at Pope John School.

Nhyira made the news in 2020 with his stellar results from the Institute of Chartered Accountants examination. He is currently the Territory Manager at PZ Cussons.

Mr Isaac Kwakwa-Sarpong is the Chartered Insurance Institute of Ghana Young Insurance Professional of the Year.

He holds, among others, a BSc. Administration (Insurance option) Degree from the University of Ghana Business School.

He is also a member of the Chartered Institute of Loss Adjusters (CILA), UK.

He began his career in Insurance with Star Assurance Company Limited and later joined Prime Insurance in September 2013 as the Head of Technical Operations and also serves as the lead trainer of Bima Advisors Limited.

Popularly known as “Arosty”, the POJOBA 1984 PRESIDENT is a former Assistant headmaster and history tutor at Pope John and the current Headmaster of Agona Fankobaa SHS

Paa Kwesi is the lead photographer and C.E.O at award-winning Ghanaian photography company, Focus N Blur. His brand has grown to become a household name in occasion and event photography.

Michael Oti-Adjei is Ghanaian Sports Journalist and the General Manager at Media General Limited (Digital). He has written for the BBC, BBC Sport, ESPN , DW.

Michael Oti Adjei also held the role of vice-chairman for the referees committee.

George Ekow Chestnut is a reporter and anchor at TV3 Ghana.

Father Aloysius Mensah is a former Chaplain of Pope John and the current headmaster of St. Thomas SHS in Asamankese.

Chase Forever, born Fianko Bossman, is an award winning RNB artiste and songwriter. He is known for hit songs including “Marry Me Tonight”, “Fire” and many others.

Desmond Kwesi Blackmore ,D-Black is a multiple award-winning Ghanaian artist/entrepreneur who owns the Black Avenue Group. He is also the owner of Club Onyx.

Ernest is part of the 3-member All Nations university team that launched the historic Ghanasat into space.

Kobina Ansah is a Ghanaian author, columnist and playwright. He is the Chief Scribe of Scribe Productions, known for their thought-provoking theatrical shows.

Prof. Gorleku is s the only Associate Professor in Radiology currently in the country and the Founding HOD of the Radiology Department at the University of Cape Coast

Dr. Michael Kpessa–Whyte is a Research Fellow with the History and Politics Section at the Institute of African Studies (IAS), University of Ghana, Legon. Dr Whyte is a former Executive Director, National Service Scheme and a leading member of the National Democratic Congress.

Kevin is Award-Winning International Actor noted for his stellar role in the movie DIVINE 419, a student film that is also the most awarded and travelled Ghanaian International Film Project in 2020.

Atto Andoh is the C.E.O of titular men’s fashion brand, Atto Andoh. The brand has carved a niche as the clothing brand for Ghana’s astute and visionary young men in diverse fields.

Rudolph Larnyoh is a trailblazer in several fields having started his trajectory to the top as a staff writer at BP Africa Communications and proceeded to OMG Voice whiles pursuing a degree at the University Of Ghana.

Larnyoh is a Unicef Talent Outreach Intern and made history as the convener of the first SG-Africa Dialogue Event in Singapore.

He could become Ghana’s future Foreign Affairs Minister after he completes his Master of Science – MS focused in International Relations from the S. Rajaratnam School of International Studies, Nanyang Technological University.